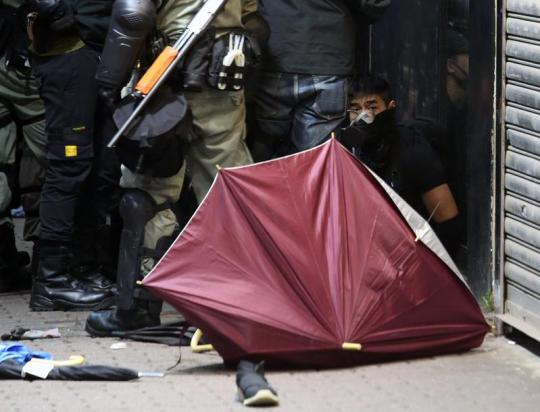 A masked rioter is arrested as radical protesters defied the government's newly imposed ban on mask-wearing at public assemblies and went on vandalism sprees across Hong Kong on Sunday. (Photo/China Daily)

Two people have become the city's first offenders charged under the newly enacted anti-mask legislation in Hong Kong, which took effect on Saturday.

The law that bans wearing masks at public assemblies is aimed at deterring radical protesters from committing violent crimes with their identities hidden.

The man and woman appeared in the Eastern Magistrates' Courts on Monday morning to face one count each of violating the Prohibition on Face Covering Regulation.

Both were released on bail but were required to surrender their travel documents, observe a curfew order and report in person to the police station every week until their cases are heard again on Nov 18 at the Kwun Tong Magistrates' Courts.

Police have not disclosed the total number of arrests made under the anti-mask legislation.

Influential figures in legal and political sectors expressed hope for a clear and unequivocal ruling in the first cases related to the new law.

The law was introduced essentially as a deterrent, Tam said, adding that she believes it will be effective as such.

Parents and teachers may also put pressure on young people and prevent them from violating the law, Tam said.

Lau Siu-kai, vice-president of the Chinese Association of Hong Kong and Macao Studies, said that charging violators of the anti-mask law showed the government's resolve in stemming violence with more decisive and powerful actions.

In an interview with China Daily, Lau said he believes the court will make an appropriate decision in rulings on the first cases under the anti-mask law as the judgment is of concern to the public interest as it deters further violations.

Hong Kong was crippled once again by citywide rampaging by masked mobs over the weekend with riotous crowds in illegal assemblies blocking roads, vandalizing subway stations and smashing bank and shop windows at multiple locations across the city. The mobs set fires on streets, hurled gasoline bombs at police and attacked those who criticized their actions.

The Hong Kong government has condemned the violence and vandalism that have taken place for 18 straight weekends.

The government urged the public not to engage in illegal activities.

By taking the law into their own hands to attack bystanders, the mobs have overstepped the bottom line of a civilized society, the statement read.

On Sunday, a woman later identified as actress Celine Ma Tai-lo was beaten up for filming rioters' acts of vandalism.

The police reiterated that they would not tolerate violence and vowed to continue to take resolute enforcement action to maintain public safety and bring all offenders to justice.