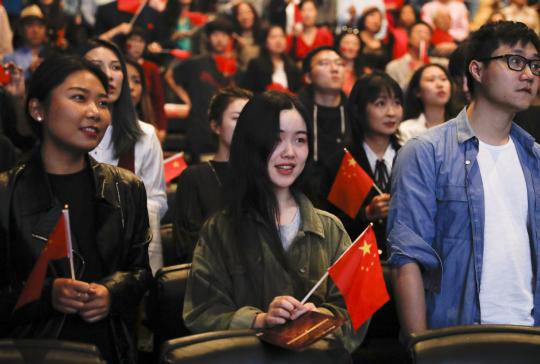 Overseas Chinese sing the theme song of the movie My People, My Country at its premiere in San Francisco on Monday. [Photo/Xinhua]

My People, My Country, a domestic film that celebrates the 70th anniversary of the founding of the People's Republic of China, has been tops in terms of Chinese mainland box office revenue since it hit theaters on Monday.

The film was released a day ahead of National Day. It is the seventh domestic film to exceed 1 billion yuan in box office revenues so far this year.

Together with another two domestic movies — The Captain and The Climbers— which also opened on Monday on the eve of the holiday, revenues for the three patriotically themed feature films reached 2.95 billion yuan by Thursday.

My People, My Countryis made up of seven short stories and features seven directors led by Chen Kaige. It draws on important historical moments during the past seven decades, aiming to awaken the shared memories of Chinese people around the world.

The seven stories are about the founding of the PRC in 1949, the successfully explosion of China's first atomic bomb in 1964, the women's volleyball team winning gold in the 1984 Summer Olympics, the return of Hong Kong to China in 1997, Beijing's hosting of the 2008 Summer Olympics, the military parade commemorating the 70th anniversary of the victory of the Chinese People's War of Resistance Against Japanese Aggression in 2015 and the successful landing of the re-entry capsule of the Shenzhou XI spacecraft in 2016.

Qin Yuan, 26, from Suzhou, Jiangsu province, booked her tickets two days before the film's screening and watched the film with her parents.

"I had watched several impressive trailers ahead of time so I decided to take in the full movie. The film's images are quite impressive and the stories very touching. My parents have even related to memories of some stories in the movie, such as the women's volleyball team victory," Qin said.

"The movie shows that ordinary people and the motherland are closely connected. These valued histories enable us to be more confident, and I am proud to be a Chinese and I am grateful to those who contributed to our country," she added.

The film has also appeared on big screens in over 100 cinemas in 54 cities across the United States, Canada, Australia and New Zealand starting Tuesday, according to CMC Pictures, a major international distributor of Chinese films and television content.

Qin also plans to watch another two domestic films — The Captain and The Climbers. She believes domestic movies are becoming increasingly alluring and she also knows about the actual events that inspired the two films, and wants to watch them on the big screen.

The Captainhas ranked No 2 in the domestic market since Monday, with a total box office take of 1.07 billion yuan as of Thursday. It is adapted from the miraculous emergency landing of Sichuan Airline's flight 3U8633 after a broken cockpit window sucked a co-pilot halfway out of the aircraft in May 2018.

This was followed by The Climbers, which raked in around 540 million yuan as of Thursday. The film tells the story of a Chinese mountaineering team who reached the summit of Qomolangma — known as Mount Everest in the West — by way of the North Slope in 1960.