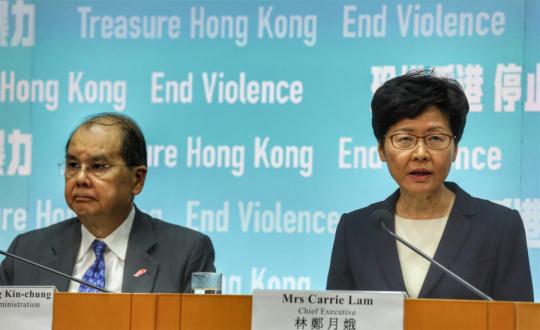 Hong Kong Chief Executive Carrie Lam Cheng Yuet-ngor on Friday announced a ban on face masks at protests and assemblies in a bid to end the violence and vandalism that have gripped the city for nearly four months.

The legislation, introduced by invoking the Emergency Regulations Ordinance, takes effect at the stroke of midnight on Friday night.

Anyone who wears a facial covering to hide his or her identity during a public meeting, public procession or illegal assembly will be held accountable for violating the ban, according to Secretary for Security John Lee Ka-chiu. Violators will be subject to a maximum imprisonment of one year and a fine of HK$25,000 ($3,205).

But wearing a mask for occupational, medical and religious reasons will be exempted, Lee said.

The anti-mask law also empowers police officers to stop a person wearing a mask in public places and requires the removal of facial coverings. Noncompliance is an offense subject to a maximum jail term of six months and a fine of HK$10,000.

Announcing the legislation, Lam said the decision is a difficult but necessary one in the public interest.

As a responsible government, Lam said it is a duty to use all available means to stop the escalating violence and restore calm to society.

The government believes the law will serve as a deterrent against masked violent protesters and rioters and will assist police in carrying out law enforcement, Lam added.

But she stressed that although the ordinance carries the title "emergency", Hong Kong is not in a state of emergency.

"We are not proclaiming that Hong Kong is entering a state of emergency."

Yang Guang, a spokesman for the Hong Kong and Macao Affairs Office of the State Council, said in Beijing on Friday that the move is necessary and will help effectively stem violence and restore order in Hong Kong.

The move was also backed by the Liaison Office of the Central People's Government in the HKSAR. In a statement, a spokesperson of the office expressed firm support to the SAR government in deterring violence by local legislation.

The much-anticipated legislation has been proposed by various sectors of society and supported by many after the city has endured masked protesters since early June.

Grenville Cross, an honorary professor of law at the University of Hong Kong and the city's former director of public prosecutions, said it is an important step to contain violence.

As traditional means haven't always been successful in deterring troublemakers in the past four months, "it is a welcome addition to the army of laws which the police have at their disposal in seeking to maintain law and order and dealing with those people who are seeking to disrupt our lives," Cross said.

"The ordinance is a reasonable restriction of the freedom of speech, of demonstration and of assembly. These kinds of freedoms are not unrestricted. They could be restricted for the purposes of national security, public security and public order," Leung told China Daily on Friday.

"It is very reasonable. And it does not affect your right of freedom of speech or demonstration so long as you do not wear the mask," she added.

Many other jurisdictions have similar laws.

The United States adopted an anti-mask law in 1845.

In 2013, Canada approved a bill forbidding people to cover their faces during unlawful assemblies. This offense carries a maximum prison term of 10 years.

Wearing masks provides a sense of anonymity and makes people more likely to violate rules and norms, according to empirical data gathered by social scientists over the past few decades.

In 1979, Purdue University psychologists in the US examined how wearing masks affected the likelihood of children breaking rules by monitoring candy-taking behavior on Halloween. They found that about two-thirds of children wearing masks broke the two pieces of candy limit, compared with only one-third of those not wearing masks.