Chengdu panda base to limit visitors during National Day holiday 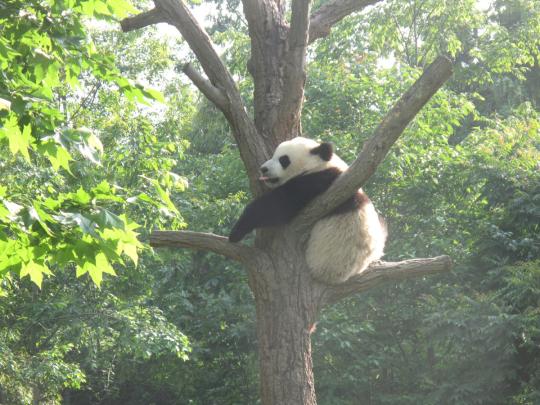 A panda rests in a tree at the Chengdu Research Base of Giant Panda Breeding in Southwest China's Sichuan Province. (Huang Zhiling/chinadaily.com.cn)

Zhou Mengqi, a veteran photographer in Chengdu, Southwest China's Sichuan province, is a great fan of pandas, having taken pictures of the cuddly bears for about three decades.

"You see people instead of pandas," he complains.

The photographer is pleased that the Chengdu Research Base of Giant Panda Breeding issued a circular on Sunday to try to mitigate the expected madding crowd.

Visitors will have to book tickets online during the National Day holiday from Oct 1 to 7. Tickets will not be sold at the ticket office or ticket-selling machines during the period.

The maximum number of visitors allowed at one time will be 22,000. If this number is reached, the base will stop admitting visitors and will operate on a one-out, one-in basis, the circular said.

The move is aimed at preventing the base from overcrowding, which has been commonplace during previous holidays.