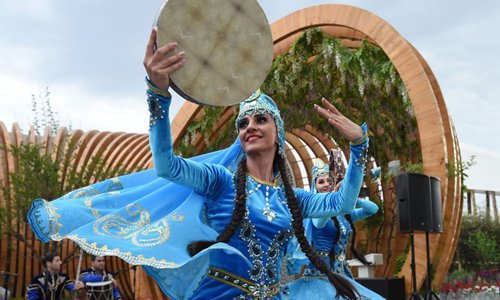 Performers dance to mark Azerbaijan Day of Beijing International Horticultural Exhibition in Beijing, capital of China, on May 26, 2019. (Xinhua/Ren Chao)

China and Azerbaijan enjoy promising prospects in co-building the Belt and Road, Chinese Ambassador to Azerbaijan Guo Min said in a recent exclusive interview with Xinhua.

With a sound and steady development of bilateral relations, Guo praised the advantages of the China-proposed Belt and Road Initiative (BRI) for both sides, emphasizing Azerbaijan's full support for and involvement in the construction of the Belt and Road.

She said Azerbaijan sees the development of relationship with China as a diplomatic priority. "China and Azerbaijan have exchanged frequent high-level visits since the beginning of this year, with mutual political trust deepening even further."

"Cooperation in trade, energy, transportation, humanities and other fields has yielded fruits," she said, noting bilateral trade reached 1.5 billion US dollars from January to August, an increase of 104 percent from the same period last year. 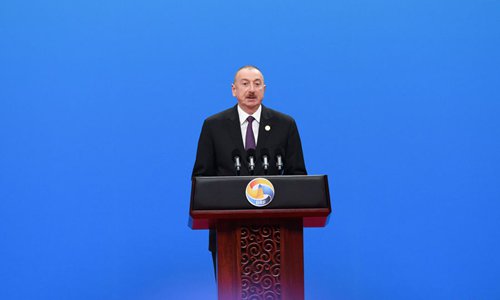 "In recent years, the two nations have been promoting cooperation in a number of areas, including education, culture, health, sports and tourism on a continuous basis," said the ambassador.

The two countries "have exchanged the visits of culture and art figures and held a wide range of film festivals, art exhibitions and other activities to actively promote unity, mutual understanding and friendly exchanges between the people," according to Guo.

"At the next stage, the two nations should capitalize on the existing potential and focus on more points of interest," the ambassador said.

She described the deep traditional friendship, high-level mutual political trust and the highly complementary practical cooperation as key foundations and effective guarantees for the stability and improvement of bilateral relations.

"China is willing to work together with Azerbaijan to push Sino-Azerbaijani friendship and cooperation to a new level and benefit the two countries and their peoples," the ambassador added. 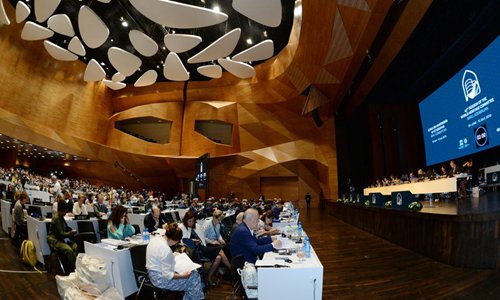 Photo taken on July 5, 2019 shows a scene of the 43rd session of the UNESCO World Heritage Committee in Baku, Azerbaijan. (Xinhua/Tofik Babayev)