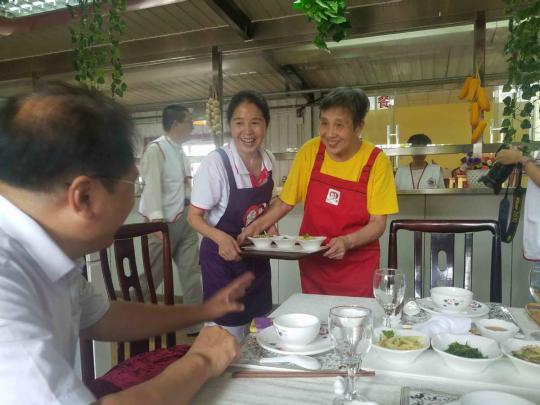 A waiter shares a moment with a customer at the China's first restaurant staffed by waiters living with Alzheimer's. The restaurant does not aim to turn a profit, but rather create an environment for patients to enhance their treatment. [Photo by Yang Cheng / chinadaily.com.cn]

The program featured waiters living with Alzheimer's disease, and has helped inspire awareness of the disease.

The Dongli Hetong Elderly Nursing Home in Tianjin announced its establishment of a restaurant staffed by five waiters aged 71-84 with mild cognitive impairments.

This is China's first restaurant of its kind.

Supported by volunteers and social workers, the restaurant will operate for one-and-a-half hours each mid-afternoon. 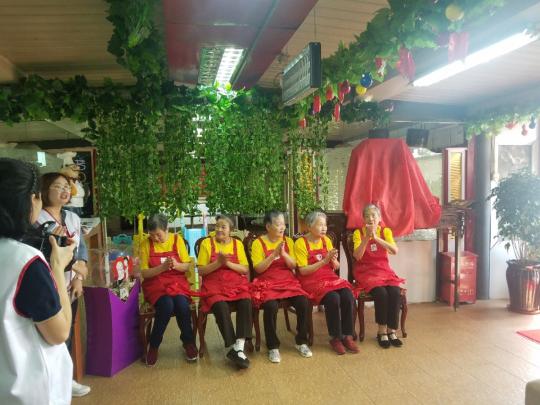 "The restaurant is not aiming at gaining profits, but aiming at providing treatment for them and enhancing their social ability with fun and respect," said Fang Kejia, Hetong Elderly Care Group president.

The five-table, 20-seat restaurant serves only reserved tables, and Fang said the group will further research on how to run the establishment, which serves dumplings, appetizers and fruit.

"We will only open it in the mid-noon, or may only open a few days a week."

Zhang Wenli, 25, a teacher at Tianjin Peijie Middle School and the restaurant's first customer, said she heard of the opening on a micro blog.

She came here to see the patients with her mother and plans to take her students to come to the home to care for the elderly patients.