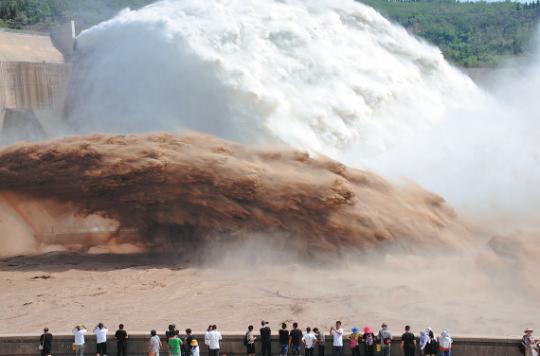 Water is discharged from Xiaolangdi Reservoir in Luoyang, Henan province. The discharge will allow more room behind the dam to capture floodwaters. (MIAO QIUNAO / FOR CHINA DAILY)

Xi, also general secretary of the Communist Party of China Central Committee and chairman of the Central Military Commission, made the remark while chairing a symposium on Wednesday during his three-day inspection tour of Henan province.

Xi said that protecting the Yellow River, at 5,464 kilometers, China's second-longest river, is crucial to national rejuvenation and the sustainable development of future generations.

The Yellow River Basin has a drainage area of over 752,000 square kilometers and covers seven provinces and two autonomous regions. The fragile ecological system in the river basin has forced people living along its banks to struggle against floods and droughts since time immemorial.

The government has attached great importance to the harnessing and development of the Yellow River. A special cleanup campaign was launched in December to address environmental violations in the basin, mainly involving illegal riverside activity and construction as well as unauthorized sand excavation.

While highlighting progress made in past years of protecting the Yellow River, Xi also pointed out difficulties and problems that still remain, including a fragile ecological environment, severe water preservation situation and development quality that needs to be improved.

He called for concerted and coordinated efforts to strengthen ecological conservation, promote better use of water resources, ensure safety from flooding along the riverbanks and advance high-quality development of the basin.

When pursuing high-quality development in the region, authorities should actively explore new ways with regional characteristics and participate in the construction of the Belt and Road to promote higher level opening-up, Xi said.

Calling the Yellow River culture a significant part of Chinese civilization, Xi underlined the need to systematically protect the cultural relics and explore the value of Yellow River culture in modern times to pool spiritual strength for the realization of national rejuvenation.

Senior officials from relevant central government departments as well as from the provinces and autonomous regions of the Yellow River Basin attended the symposium.