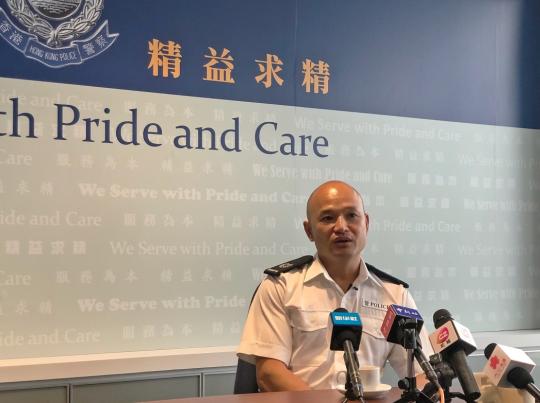 A senior Hong Kong police officer who has participated in multiple operations combating violence and riots in the city in the past three months has called on protesters to regard all Hong Kong citizens as their family and stop violence on Friday, Mid-Autumn Festival.

Hong Kong is the communal home for more than 7 million residents and the rule of law and social stability did not come easily – people should show due respect to them, said Lau Chak-kei, station sergeant of the Hong Kong Police Tactical Unit.

"It's understandable that family members hold different points of views to an incident and conflicts may happen sometimes as all family relationships undergo ups and downs," Lau said.

However it's unacceptable to damage or even ruin homes when family members express their viewpoints, said Lau during a media interview on the traditional Chinese festival.

Lau was brought to public attention after he injured his face, eyes and foot during a police operation in Kwai Chung, New Territories, on July 30, when surrounded and beaten up by a large number of black-clad mobsters for more than 10 minutes.

He said that Hong Kong residents and even some from the Chinese mainland have over the last several days brought mooncakes, a signature sweet pastry for the festival, to police officers at several of the city's police stations, which gave them heart.

"Such support from the public inspired us to be more dedicated to our work to safeguard the peace and prosperity of our home city," said Lau, whose father was a policeman and whose wife also works for the police force.

Recalling the operation on July 30, Lau said that he and his colleagues were in the middle of more than 1,000 radical protesters and that some attempted to grab his revolver after he was beaten to the ground.

He said he was equipped with adequate police weapons but decided not to use most of them. "I didn't make one single shot even under a life-threatening situation."

"At that moment I thought that these young people are also children of other people, and I didn't want to hurt them and make their parents end up in sadness," said Lau, father of two children.

He said that doctors have arranged an operation on his foot owing to the injury.

A 23-year-old policeman, who wanted to be identified by his surname, Tsang, who worked together with Lau on July 30, said that the radical protesters cast fire extinguishers, water bottles, eggs, and sprayed fluids at them. Tsang was injured after being hit by a fire extinguisher, he said.

Despite the attacks, violent verbal abuse and personal information being leaked on the internet, Lau said he had not heard one single police officer resigning in the past three months.

"We won't give up on our pursuit of our careers because of a small number of people's misunderstanding.

"I believe there is a joint strong belief in the heart of each Hong Kong police officer now, which is to go hand-in-hand with our comrades to end riots and restore social order," he said.

Representing the Hong Kong police force that performed professionally over the past three months, around 10 police officers from Hong Kong, including Lau, have been invited to the grand military parade in Beijing on Oct 1, the 70th anniversary of the founding of the People's Republic of China.

"I'd never regard this opportunity as an honor for me as an individual. Instead, this is the country's and people's recognition for the Hong Kong police force as a whole," Lau said.