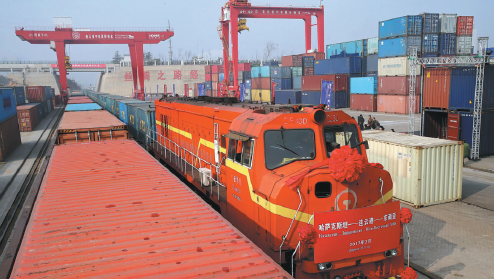 A cargo train loaded with Kazakhstan-produced wheat arrives in Lianyungang city, which stands at the eastern end of the Eurasia Continental Bridge and is a major port for Kazakh exports to the world. (WANG JIANMIN/FOR CHINA DAILY)

Entrepreneur calls China the gateway of international trade for Kazahkstan

As China and Kazakhstan are closely linked with the Belt and Road Initiative, businesses from both sides have deepened their two-way trade and investment activities in recent years.

According to Chinese Customs, trade between China and the Central Asian country reached $11.42 billion during the first seven months of this year, growing 8.7 percent year-on-year.

Kazakhstan's exports to China increased 17.4 percent to reach $5.19 billion in the same period. The substantial growth resulted in a more balanced trade, as China's surplus decreased 48.8 percent to $630 million.

China's investment in Kazakhstan also saw a steady growth last year. According to the Foreign Ministry of Kazakhstan, Chinese investment amounted to $1.5 billion in 2018, representing an increase of 6.1 percent year-on-year.

As the country highlights foreign investment in its economic growth, many entities in Kazakhstan are in close contact with Chinese investors.

During a June 18 presentation in Shanghai for Chinese investment companies, AIFC Governor Kairat Kelimbetov said the AIFC and its stock exchange, the Astana International Exchange, aim to "connect investors with promising projects that require financing to realize their full potential".

Kelimbetov said BRI projects in the region are "a clear and important priority".

"Another equally promising opportunity lies with mid-cap companies in Russia, Kazakhstan, Belarus, Georgia and other countries in the region that are eager to engage with Chinese investors," he said. "We are helping to bring them together."

Earlier that month, China's Silk Road Fund signed a memorandum of understanding on a strategic partnership with the AIFC and a framework agreement with Astana International Exchange to subscribe for a portion of common shares through the China-Kazakhstan Production Capacity Cooperation Fund, a wholly-owned subsidiary of Silk Road Fund, according to earlier reports in China Daily.

The cooperation is expected to help better align the BRI with Kazakhstan's new economic policy Nurly Zhol ("bright path" in English), strengthen China-Kazakhstan bilateral ties in key areas, advance Kazakhstan's financial reforms and the development of its capital market, and provide an incentive for Kazakhstan's social and economic progress, according to a fund spokesman.

It will also allow Silk Road Fund to leverage its financial expertise to boost the two countries' cooperation in production capacity through financial partnerships, the spokesman said.

The deepening partnership under the BRI framework has resulted in enhanced presence of Chinese companies in Kazakhstan.

According to a Xinhua report, the first phase of the Shelek 60-megawatt wind power project in Kazakhstan began construction on June 27, 2018.

The project is located in the Ili River Valley, in the west extension of the Tianshan Mountains in Kazakhstan. It is about 150 kilometers from Almaty and 210 km from the Khorgos Land Port in China.

After its completion, the project is expected to greatly alleviate the power shortage in southern Kazakhstan, a PowerChina representative said.

While more Chinese investments are flowing to Kazakhstan, businesses from the Central Asian country have strengthened their presence in China.

Kazakhstan's Continental Bridge Supply Chain signed an agreement with the Jiaozhou city government in February to build a farming products processing and commodities trade center in Jiaozhou, according to reports on the official website of the Qingdao city government.

Jiaozhou is a part of the coastal metropolis of Qingdao in Shandong province.

The project will demand a total investment of $100 million and will cover a land area of 50,000 square meters.

It is designed to process high-quality wheat from Central Asia and Russia, producing flour targeting the Chinese and overseas markets.

The project will also include a cross-border trading center for bulk cargo made in China, such as textiles and household appliances.

As the inland country of Kazakhstan stands at the center of the Eurasia Continental Bridge that connects the eastern coasts of China and western coasts of Europe, many businesses in this country view China as the gateway for their international trade.

Alexander Machkevitch, chairman of Eurasian Resources Group, said: "When Kazakhstan became independent, many people predicted it would find trouble because it was a landlocked country. People always recognize a coastal country has better conditions to develop its economy.

"However, the fact is that we don't need sea, because China is the seaward gateway for Kazakhstan."

China accounts for 20-30 percent of ERG's total sales. It is a key sales destination for its high-carbon ferrochrome, cobalt and copper, according to the company.