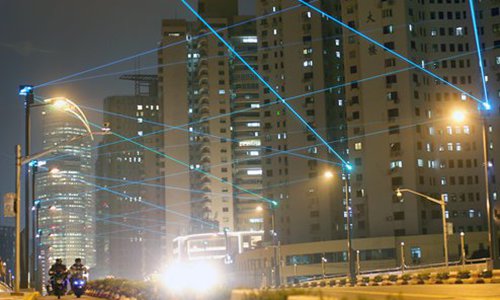 A lighting renovation project for Hengfeng Road Bridge in Jing'an district, which spans across the Suzhou Creek, was officially completed after one year of construction. In addition to installing traditional street lamps, the bridge also installed lasers which give it a blue hue. (Photo: Yang Hui/GT)

Each function used to have a separate pole, which cluttered the streets of the capital city.

Media reports welcomed the poles for combining together different functions into one, pedestrians will find themselves walking less crowded streets.

The 7-10-meter-tall-street lamps have slots for devices, street nameplates and guideboards to be inserted, the Beijing Daily reported on Monday, citing the builders.

Some can also be used to hang electronic screens to display real-time traffic, parking and restaurant information, the report said.

If there is a need for more functions, additional devices can simply be installed into the vacant slots on the lamps, it said.

In the western part of Zhongguancun, a technology hub in Haidian district, 616 street poles or 58 percent of the total, can be dismantled thanks to the new street lamp, according to the report.

Other test zones include Dongcheng and Tongzhou districts.

Accompanying the street lamp upgrade, substations and communication boxes more often found on sidewalks can be hidden into walls, the Beijing Daily reported.