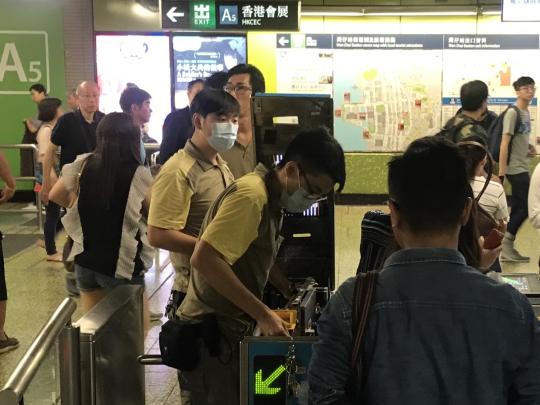 MTR staff members repair a ticket gate at Wan Chai MTR station on Sept 9, 2019 a day after radicals went on a rampage inside the station. (PHOTO/CHINA DAILY)

They also appealed to members of the public to respect the responsibilities of MTR's frontline staff as well the general public's right to travel.

Their response came after they accompanied Chief Executive Carrie Lam Cheng Yuet-ngor to the area around Central station, Hong Kong Island. On Sunday, radicals started fires near several entrances of the station and smashed windows.

"MTR is the most important part of Hong Kong's transportation system," said Rex Auyeung Pak-kuen, chairman of MTR Corporation, noting how the corporation facilitated on an average 5 million passenger trips every day.

MTR CEO Jacob Kam Chak-pui expressed his gratitude to MTR staff members who have been working around the clock to repair the damaged facilities and keep train services running. "MTR is the pride of Hong Kong," Kam said, adding that the smooth operation of the city's metro system is in the interest of all Hong Kong residents.

All exits of the Central station were open on Monday, thanks to overnight repair work by MTR staff members and an enterprising cleaning crew that started work early in morning.

But anxiety and worry still leave a discernible mark on this busy business district in the heart of Hong Kong Island.