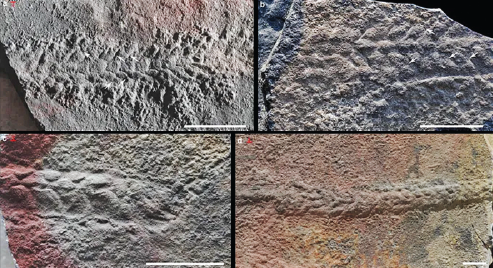 Scientists have found the fossilized tracks of a 550-million-year-old creature at an archaeological site in Hubei province in Central China in what is thought to be the earliest sign of animal mobility ever discovered.

The tracks were made by an extinct millipede-like organism named Yilingia spiciformis, which translates as "spiky Yiling bug", which was named after a Chinese city near the discovery site.

The fossils of the tracks and the creatures that made them were found in multiple layers of rock by Xiao Shuhai, a professor of geosciences from Virginia Tech College of Science in the United States, and by two researchers from the Chinese Academy of Sciences, which is also known as CAS.

"This discovery shows that segmented and mobile animals evolved by 550 million years ago," Xiao said. "Mobility made it possible for animals to make an unmistakable footprint on Earth, both literally and metaphorically. Those are the kind of features you find in a group of animals called bilaterians. This group includes us humans and most animals. Animals and particularly humans are movers and shakers on Earth. Their ability to shape the face of the planet is ultimately tied to the origin of animal motility."

Xiao had earlier found what he believed were animal tracks at the same site several years ago. This latest find was accompanied by a fossil of the creature itself, providing the firmest evidence yet that the trails were produced by a life-form.

Yilingia spiciformis was around 10 centimeters long and 6 millimeters wide. The creature had around 50 body segments, a left and right side, a back and belly, and a head and tail. The fossilized tracks were produced by the animal dragging its body along the muddy ocean floor.

Bilaterians are animals that display symmetry on either side of their bodies and are capable of movement. Their emergence is considered one of the most notable events in early animal evolution.

Scientists estimate that bilaterians arose in the Ediacaran Period, between 635 and 539 million years ago, but this claim was not corroborated with solid evidence from the fossil record, until Xiao and his team unearthed Yilingia spiciformis.

"This is a remarkable finding of highly significant fossils," said Rachel Wood, a geoscientist from the University of Edinburgh in Scotland who was not involved with the study. "We now have evidence that segmented animals were present and had gained an ability to move across the sea floor before the Cambrian (Period), and more notably we can tie the actual trace-maker to the trace. Such preservation is unusual and provides considerable insight into a major step in the evolution of animals."

Xiao believes that the tracks might also display the first evidence of decision making by an animal. He said the animals appear to have been moving toward or away from something, suggesting they may have had a central nervous system.

"When and how animal locomotion evolved defines an important geological and evolutionary context of anthropogenic impact on the surface of the Earth," said Xiao.