Largest lantern festival in North America to be held in NYC 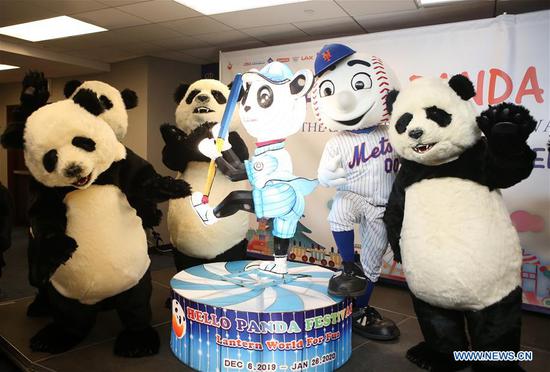 Costumed pandas pose for photos with a panda lantern and a New York Mets mascot during the launch ceremony of the Hello Panda Festival in New York, the United States, on Sept. 9, 2019. （Xinhua/Qin lang）

A winter festival featuring Chinese lanterns, arts and world cuisines will land in New York's Citi Field in December as the largest of its kind in North America, according to a press conference on Monday.

Spanning nearly 70,000 square meters inside the famous baseball park in the borough of Queens, the Hello Panda Festival will showcase over 120 sets of colorful lanterns lit up by some 10 million bulbs and comprised of six themed parts, which seamlessly blend tradition with innovation.

The highlights will include a huge panda lantern at the gate, the world's tallest Christmas tree lantern, lanterns of life-sized dinosaurs, an enormous fairy tale castle, a fountain and a 30-meter long light tunnel, offering visitors an immersive experience while wandering in the park.

To provide a cozy and warm environment in the coldest season, six giant heated tents will be set up with live performances, DJ parties, galleries, and a holiday market inside. Visitors will be able to learn traditional Chinese handcrafts such as paper-cutting and sugar painting from leading instructors.

Food will also be a prominent part of the festival and over 60 vendors will meet the appetite of global visitors with a variety of cuisines including Chinese, Mexican, Thai and Italian.

Although the first one is yet to open, the CPAA is already considering making the festival stay in the Citi Field as a regular attraction of the Big Apple in the holiday season.

The festival will be held from Dec. 6 through Jan. 26, 2020, opening seven days a week in the evenings. Tickets will be available online from Sept. 12, according to the CPAA.