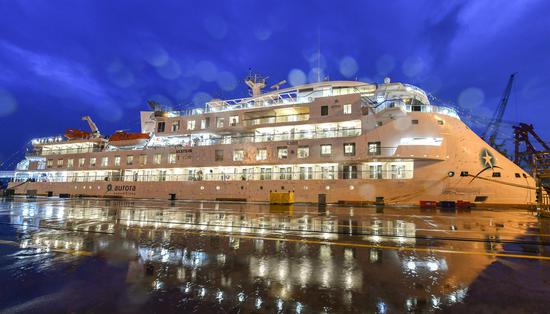 The first polar cruise ship made in China was handed over to a U.S. company on Friday. (Photo by Tang Shuquan/for chinadaily.com.cn)

Experts say China is stepping up to become a world class shipbuilder after the first China-made polar cruise liner was handed over to a U.S. company on Friday in Haimen, East China's Jiangsu Province, the base of China Merchants Group (CMG).

According to CMG's website, they have taken 10 orders from U.S. vessels management company Sunstone Ships.

After 28 months' building, the first to be launched Friday was named Greg Mortimer.

"It shows the high international recognition of our shipbuilding industry, which is improving very fast," Cheng Juehao, a deputy chief of the Shanghai International Shipping Institute's Cruise Economy Research Center, told the Global Times on Sunday.

According to Cheng, the CMG ship boasts advanced cold-proofing, environmental protection and an enhanced capacity to return safely to harbor in extreme conditions.

In extreme weather and rough oceanic conditions, the cruise liner is able to sail 1,500 nautical miles to ensure people's safety and return to port.

The liner is also outfitted with cold-proof equipment for lifeboat rescue.

The cruise liner is not only a ship but also a milestone in the history of China's shipbuilding industry, which shows China's ambition of competing in the world market, said Claude Maillot, president of French ship inspection firm Bureau Veritas in North Asia.

According to the CMG website, the ship is scheduled to make its 12-day maiden voyage to Antarctica and the tickets have been sold out, with prices ranging from $10,500 to $11,800 per person.