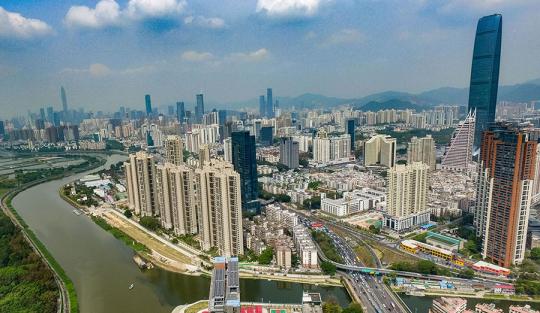 Shenzhen continues to play a leading role in China's new round of deepening overall reform as it is set to be built into "a pilot demonstration area of socialism with Chinese characteristics."

The move which was mentioned in a document issued by the Communist Party of China (CPC) Central Committee and the State Council in August.

Pilot demonstration means that Shenzhen should not only be a pioneer but also serve as a model for other cities, so as to build an "ideal city" of socialism with Chinese characteristics, said Wu Sikang, a researcher with the Development Research Center of the Shenzhen government.

There were 129 Chinese companies in the Fortune 500 list of 2019 released in July, including 20 from the Guangdong-Hong Kong-Macao Greater Bay Area: seven from Shenzhen, seven from Hong Kong, three from Guangzhou, two from Foshan and one from Zhuhai.

Shenzhen has developed from a small town into a metropolis of international influence, and the market has maintained a decisive role in Shenzhen's resource allocation. Huawei, Tencent, Dajiang, BYD and Evergrande are successful cases of private enterprises and joint-stock system in Shenzhen, said Song Ding with the China Development Institute.

The key to Shenzhen's success is its leading position in the Chinese mainland in terms of marketization, internationalization and rule of law, Song added.

The August guideline laid out a timeline for the city's development -- by 2025, it will become a leading city globally in terms of economic strength and quality of development; by 2035, not only will it become a national model of high-quality development, but also a hub of innovation, entrepreneurship and creativity with international influence.

In addition to the demanding development goals, the guideline has many breakthroughs, said Qu Jian, vice president of the China Development Institute.

For example, the government will encourage international organizations and large companies to set up branches or headquarters in Shenzhen, and allow Shenzhen to "adapt laws, administrative regulations and local regulations to meet the needs of reform and innovation," which is a sign that China will view Shenzhen as a pioneer in deepening overall reform, according to Qu.

However, there is still a long way for Shenzhen to go to meet the requirement of the pilot demonstration area, said Zhang Yansheng, a researcher with the China Center for International Economic Exchanges.

Wu said Shenzhen will certainly be closely linked with other cities in the Pearl River Delta, as well as Hong Kong and Macao, in building a pilot demonstration area of socialism with Chinese characteristics.

The guideline supports Shenzhen's implementation of a more open and convenient system for the introduction and entry and exit of overseas talents, Qu said.

It also allows international talent with permanent residence status to start businesses in Shenzhen and ensure that the people from Hong Kong and Macao working and living in Shenzhen will receive same treatment as local residents, which will boost Shenzhen to become more open and internationalized, according to Qu.