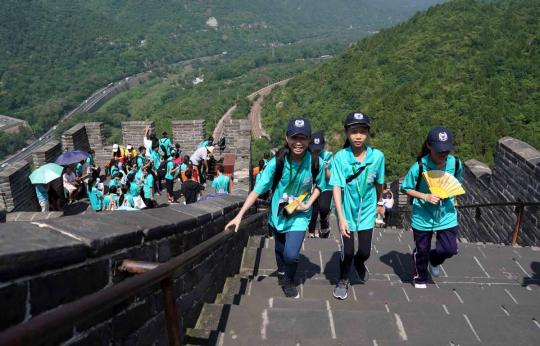 Members of a delegation from 14 uniformed groups in Hong Kong climb the Great Wall on July 22. More than 300 young people took part in the eight-day tour. (JU HUANZONG/XINHUA)

The cultures of both Hong Kong and the Chinese mainland are exciting and impressive, and they share the same roots, according to Yu Hang-hong, a member of the Hong Kong Army Cadets Association, who recently visited Beijing for the first time.

The 19-year-old history major at Hong Kong's Lingnan University was part of a 301-strong delegation from 14 uniformed groups in Hong Kong. The eight-day trip, which started on July 20, allowed the young people to gain a better understanding of traditional culture through visits to cultural heritage sites in Beijing and Shandong province.

The tour - the Hong Kong Uniformed Groups 10,000-Mile Friendship Trek - originated in 2002. This year, the itinerary covered the Great Wall in Beijing, along with Jinan, Qingdao and Qufu, the hometown of Confucius, in Shandong, where they visited a temple dedicated to the ancient sage.

It was sponsored by the Hong Kong Home Affairs Bureau and the city's Youth Development Commission, with assistance from the Liaison Office of the Central People's Government in the Hong Kong Special Administrative Region.

Both the mainland and Hong Kong have recently expanded such exchange programs with the aim of carrying forward national spirit, cultivating the concept of the State and establishing friendships. To date, more than 7,000 young people from Hong Kong have joined the program and traveled to 13 mainland provinces and cities.

"We have different themes every year, such as in 2008, when we focused on the Olympic Games. This year's theme was to explore Confucian culture," said Wong Wai-man, the delegation leader.

"Cultural heritage is the root of the country's culture, and we discovered the roots of many Hong Kong traditions during our trip. Our young people should come to the motherland and learn more about traditional culture." 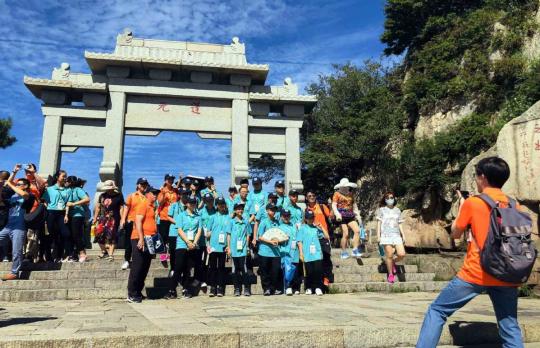 The visitors pose for a photo at Mount Tai in Shandong province on July 25. LAN GONGLAI/XINHUA

Like most of his peers, Ma Weiye was impressed by the magnificence of the cultural heritage sites they visited.

The 17-year-old member of the Hong Kong Adventure Corps moved to the city from Guangdong province in 2015.

"The feeling of visiting these places rather than viewing them in photos is totally different. I would never have imagined how great they are or understood the culture behind the heritage if I hadn't visited them," the third-grade junior high school student said.

"My parents have high expectations for my trip. They hope I will learn more about traditional culture. They asked me to take lots of photos to share with them and tell them what Beijing and Shandong are like."

He said he preferred the historical and cultural sites on the mainland to those in Hong Kong because he experienced a strong sense of history.

The Forbidden City, the Great Wall and Beijing's alleys and courtyards are all well-known in Hong Kong, he said, adding that while his home is a multicultural city, awareness of Confucian thought is low.

"I want to visit other provinces and learn more about them. I am very interested in history and culture, which enable us to feel the ancients and encourage us to visit their monuments," he said.

Lau Tsz-kee, a member of the Hong Kong Auxiliary Medical Service Cadet Corps, was delighted by the stately buildings, delicate paintings and the things she learned about Confucius during the trip.

On a previous trip to Beijing the 15-year-old learned about e-commerce, but she enjoyed the cultural tour much more because she discovered a connection with history.

"Many places in Beijing have historical value, such as Qianmen Street and Wangfujing; they are well-preserved and in harmony with modern elements," she said.

"I learned about the Confucian ideas of benevolence and forgiveness from books, but visiting the birthplace of those ideas in Shandong was very exciting. I began to understand why his ideas have influenced us for several thousand years."

Wong Yuki, a delegation leader from the Scout Association of Hong Kong, said the trip offered the young people a platform to enjoy traditional culture and experience the nation's roots at their purest.

She pointed out that many young people in Hong Kong don't like to leave home, so they need to be offered opportunities to visit mainland cities.

"We are Chinese. We should be aware how other people in the country live and communicate," she said. 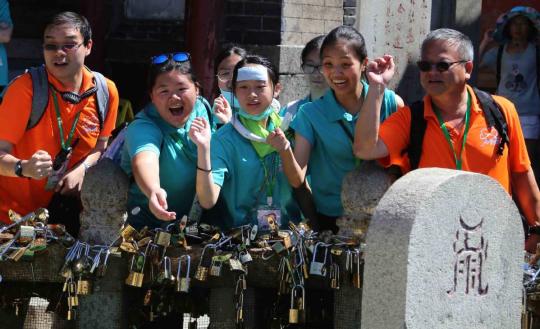 Delegation members throw "good luck" coins into a basin on the top of the mountain. YANG ZEKUN/CHINA DAILY

Initially, Yu, the history student, thought the trip might be similar to other mainland tours he had taken. However, the moment Yu arrived in Beijing, the first stop, he had a feeling that he would be surprised.

He quickly discovered the answer to a question that had been bugging him: To what extent is Hong Kong connected culturally with the mainland?

"I now feel that we are one family with the same culture and customs. Many things, such as the family culture and harmony that we often talk about in Hong Kong, come from Confucius," he said.

"There are no barriers or cultural differences between Hong Kong and the mainland. Hong Kong may have absorbed some Western ideas, but everything is based on traditional Chinese culture - people have the same roots," he said.

"I've been to Heilongjiang province, Shanghai, and now Beijing and Shandong province. These places all have their own culture, reflecting the inclusivity and diversity of China."

Illness prevented Yu Ka-wing, 14, a member of the Girls Brigade Hong Kong, from reaching the highest point of the Great Wall, which left her feeling sad. However, the trip to Mount Tai and the Temple of Confucius made up for her disappointment.

She likes history and traditional culture, so she prepared for the trip by studying Confucius.

"I often go to the library with my classmates to read history books. History and culture need something concrete to show the world, because words and pictures are sometimes quite dull, so what you see in practice is different," she said.

"Some of my friends think the mainland has exactly the same history and culture as Hong Kong, but now I know how great China's history is. We speak Cantonese and English a lot in Hong Kong, but we also feel good when we speak Mandarin, because we have the same cultural roots."

Chong Ring-ning, 15, a member of the Scout Association of Hong Kong, enjoyed her visit to the mainland, and is planning to apply to a university in Beijing because she is attracted to life in the capital.

The senior high school student is studying the international baccalaureate diploma program at school. "Most of my classmates will apply to study at universities in Hong Kong or overseas, but I don't want to do that - I feel that the mainland is really good," she said.

"I knew the mainland had a lot of beautiful and interesting places, and I would not be resistant to the culture, unlike some people in Hong Kong."

Now, she wants to travel more extensively on the mainland - especially to places tour groups don't visit - to learn about local cultures and customs and try the wide variety of food.

Hui Chun-long, director of the Association of Hong Kong Flag-guards, said the trip would help the young people learn more about the mainland and culture. "Confucius is a bit strange to them, so the trip and detailed introduction helped a lot," he said.

On July 1, 2002, to mark the fifth anniversary of Hong Kong's return to the motherland, Hui and eight friends founded the association, which promotes awareness of the National Flag, the National Anthem and the National Emblem and urges young people to cherish those symbols.

Hui, who has studied Confucian doctrine, visited Shandong when he was a college student majoring in history. "Chinese traditions, such as respecting teachers, caring for others, and benevolence, are deeply rooted. Our association regularly stresses the need to care for teachers, students, friends and classmates in school, which derives from Confucian culture," he said.

"We also emphasize morality. In traditional Chinese culture that is more important than people's abilities, and that principle holds true today. I believe it is an inevitable that we will learn more about traditional culture."

He cited a classic maxim from The Book of Rites, an important book of Confucianism: "Cultivate oneself, put the family in order, govern the state and pacify the world."

Many members of the delegation said their involvement was a way of thanking the society that raised them, and every uniformed group is aided by volunteers who help train the students.

For example, Wong Chi-tak, a surgeon who acted as the delegation's medical officer, has attended training sessions almost every week since he joined the Hong Kong Adventure Corps in 2015.

In 1993, he visited Beijing, and although the city's appearance and people's lifestyles have changed, he can still sense kindness and hospitality.

He joined the Auxiliary Medical Service Cadet Corps when he was a junior high school student, and after training as a doctor, he decided to serve the uniformed groups because many lacked medical officers.

Like other voluntary personnel, he offers his services free of charge and covers his own costs for transportation, food and other items.

Wong, the surgeon, said: "I just want to do something to serve society, and I am very happy to see young people grow up through training. This is a process of passing down knowledge to them, just like Chinese culture is passed down and carried forward from generation to generation."