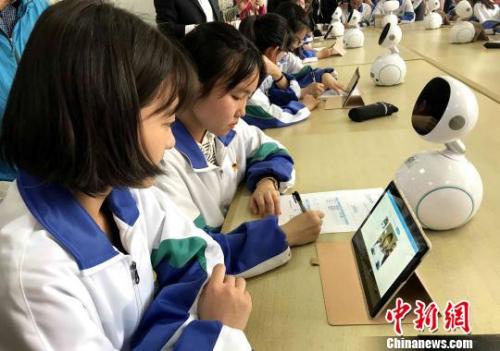 Students use a tablet PC to interact with a robot in the classroom. (File photo/China News Service)

(ECNS) -- China's Ministry of Education joined seven other governmental departments to roll out a guideline on the use of educational apps in schools, following consideration of teacher and parent opinions, according to a news conference in Beijing on Thursday.

The guideline states students or parents should not pay to use apps required by schools and there should be no commercial advertising or games involved.

It also requires educational authorities and schools to regulate the selection process of apps and respect the opinions of teachers, students and parents. Apps used in schools should be registered with authorities. Cooperation between app developers and schools also needs to be regulated.

The guideline calls for improved management of data collected and protection of personal information.

The market for online education and training is now valued at some 260 billion yuan ($36 billion) and includes about 80 million users who are elementary and middle school students. Amid rapid integration of the Internet and education, a range of stakeholders say problems have emerged with regarding harmful information, advertising or monopolies.

Authorities in China have launched a review of educational apps and banned more than 200 deemed to pose serious harm to youth, according to the news conference.