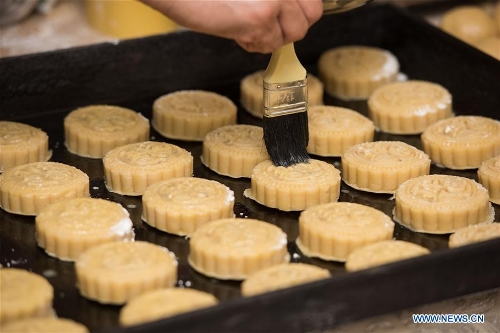 A pastry cook brushes the moon cake with egg mixture at a Chinese restaurant in Cairo, Egypt. Photo: Xinhua

Garic Kwok, also a company board member, outraged Chinese mainland internet users after posting pictures and words in support of protesters and mocking the government and police force of the Hong Kong Special Administrative Region.

After his posts went viral on the Chinese mainland, Kwok deleted them and posted a message saying "I apologize if my words are misunderstood or offend someone" but that they were a "personal share" not related to Taipan.

Taipan has more than 100 outlets on the Chinese mainland.

The primary mission of the company is to focus on products and services, without any political or religious bias, an employee from the marketing department of Taipan, told the Global Times on Monday.

This alleged apolitical stance is "actually a clear political stance -conniving with rioters," said Dong Shaopeng, a senior research fellow at Chongyang Institute for Financial Studies of Renmin University of China in Beijing.

Dong told the Global Times that a "business entity has its social responsibilities. It is impossible for a company to make profits and earn reputation while its major executives or board member break the Basic Law and damage the social stability."

Chinese net users who called for the boycott said if the firm supports Hong Kong secessionist forces, it should get out of the mainland.

"If the company wants to give up the mainland market, we could help them to get out," posted another.

Global Times Monday found that major e-commerce platforms including Alibaba's Tmall and JD.com have removed products and online stores related to the company. Searches for the brand generated no results.

Liu Shuting, a Beijing distributor of Taipan products, told the Global Times Monday that all her outlets are asking for canceling the orders.

Liu said she had inventories worth 1-2 million yuan ($140,000) waiting to hit shelves: The Mid-Autumn Festival - peak season - which falls on September 13 when moon cakes are the traditional snack.

"Kwok's apology was just a show because he knew the company would face great losses. I certainly will not buy its products again," Bai Siming, a former customer, told the Global Times on Monday.