For flexible workers, labor rights are a slippery slope 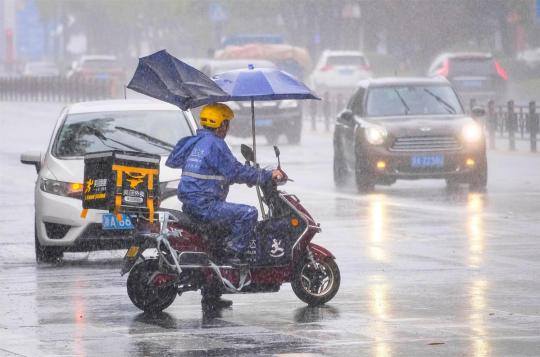 A food courier makes a run in a rainstorm triggered by Typhoon Lekima in Hangzhou, Zhejiang province, in August. (ZHAN YU/FOR CHINA DAILY)

Food delivery services are becoming mired in controversy as the companies running the ordering platforms don't allow their employees - who ride electric bikes - to leave in bad weather, which has caused a number of injuries and even deaths.

It's suspected that he died from an electric shock as his bike went through water in the street, though his death is still under investigation.

A 25-year-old food deliveryman from Shanxi province surnamed Ma - who has worked for Meituan, a Beijing food delivery service, since early 2018 - said that he and his peers are used to the requirements because of the increasing number of orders on rainy days.

However, he is concerned more about personal safety than the extra money brought in by additional orders in bad weather.

"We usually use electric bikes as food delivery vehicles, which can easily cause a shock in deep puddles on rainy days," he said. "Moreover, the money we get for each order is no higher than the average order, about 7 yuan ($1) per order."

He said that he didn't sign an official contract with the platform after he simply registered online, which makes him worry about possible accidents while he works.

"We only pay 100 yuan for insurance, but actually most of my peers have no idea what kind of insurance the platform bought for us," he said.

Gan Mantang, a professor with Fuzhou University, said that people are flocking into flexible employment because of the burgeoning internet economy.

"But the regulations or State-level policy on how to protect these people's labor rights are yet to be perfected," Gan said. "Usually, the platform gives orders to the deliverymen and takes commission fees from the deliverymen after they finish the order. It's just unfair that the platform takes the money while assuming as little responsibility as possible for any accident that may happen in the process of delivering food.

"It's because no official contracts are signed between deliverymen and platforms. Even if a food deliveryman can earn 10,000 yuan per month, they take higher risks than average employees who have sound insurance covered by their companies."

Gan said that the most important measure is to clarify the labor relationship between food deliverymen and the service providers, which needs strong support from the government.

Thankfully, the government is helping secure the labor rights of people in flexible employment, such as food deliverymen and Didi drivers.

Zhang Guang, general office director of the All-China Federation of Trade Unions, said at a news conference in early February that the federation strongly emphasized the protection of rights for people in some new professions like food deliverymen, as their number grew to over 70 million in 2017.

"These new professions do have advantages, such as lower qualifications and flexible working schedules. However, the flexibility of employment makes it more difficult to define the labor relationship, so it's hard to win some labor rights," he said.

Liu Yingxiang, spokesman for the federation, said at the time that the federation is endeavoring to include these people into the federation to offer them assistance when confronting problems concerning their rights.

In addition, the federation has proposed several plans to improve legal regulations to better protect the labor rights of people in flexible employment, according to Liu.