Mixed fortunes for oil, gas giants in first half 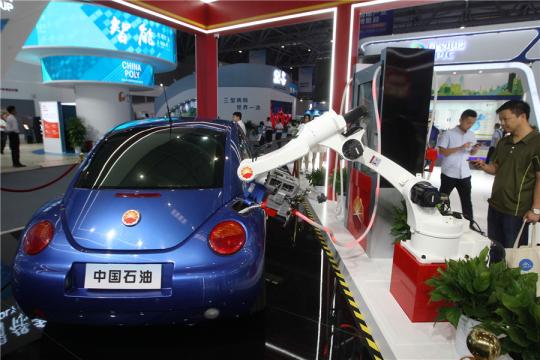 The first half of 2019 has witnessed different profit outcomes among China's top three oil and gas companies, which experts said was mainly due to the profit plunge in downstream refining and chemicals sector dragged by overcapacity and waning demand.

According to their recently released semiannual reports, Petro-China Co Ltd and CNOOC Ltd posted rises in first-half earnings, while that for China Petrochemical Corp (Sinopec) was 24 percent down year-on-year.

Sinopec's revenue in the first half of 2019 rose 15.3 percent year-on-year to 1.5 trillion yuan, with earnings being only 32.2 billion yuan.

Li Li, energy research director at ICIS China, a firm providing analysis of China's energy market, said increased crude oil prices in the first half, against a sharp decline in profit margins of downstream oil refining and chemicals, influenced the profitability of the three companies in opposite ways.

"Higher prices of crude oil boosted the profit margins of PetroChina and CNOOC Ltd in the first half, as upstream exploration and production of crude oil are the main business of the two companies," she said.

"On the contrary, gross margins in both oil refining and chemicals declined sharply during the period, and that led to Sinopec's profit drop."

Operating income of PetroChina's upstream exploration and production sector, the largest contributor to its net profit, was 53.63 billion yuan in the first half of 2019, up 23.74 billion yuan from that in 2018, but that in refining and chemicals was 4.97 billion yuan, a decline of 19.72 billion yuan year-on-year.

Li said as competition in downstream is getting fiercer with growing new capacities, the second half will remain tough for Sinopec if it does not update its product portfolio to better meet market demand, such as increasing supplies of low sulphur fuel oil for ship use and boosting refined oil exports.

Lin Boqiang, head of the China Institute for Studies in Energy Policy at Xiamen University, said: "Overcapacity in oil-refining and chemicals, accounting for up to 20 to 30 percent of the total capacity, has been a long-time problem for the healthy development of the industry, and the problem is getting worse with a torrent of large private capacities planned to be completed next year."

According to him, overcapacity in the downstream sector is flared up by some companies' thirsty for expansion and local governments' desire for more tax and employment, but ultimately disrupts the balance of market supply and demand, especially against the background of rising uncertainties in the global economy.

The way out comes from the authorities' better industry policy designs, including drawing up reasonable industry development plans, refining the related tax structure, and strengthening tax supervision to avoid tax evasion, he said, adding that it is very important to tax downstream products rather than refined oil sales.

Zheng Xin contributed to this story.