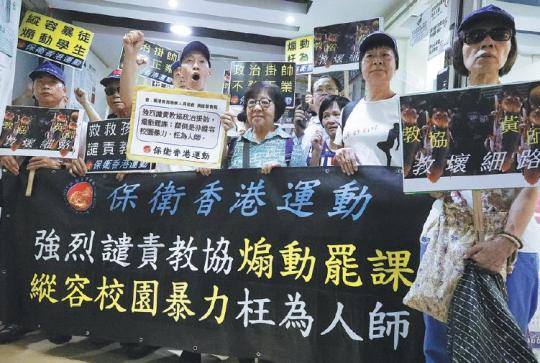 Members of the Defend Hong Kong Campaign protest against the Hong Kong Professional Teachers' Union's call for a strike at the office of the teachers' union in Hong Kong on Wednesday. （CHINA DAILY）

Hong Kong's educators on Thursday expressed concern over secondary school students' participation in political assemblies, warning that it is a worrying sign for these juveniles in developing their sense of values.

Their remarks came as hundreds of secondary school students, together with some teachers and parents, rallied at Edinburgh Place in Central by Victoria Harbor in opposition to the now-shelved extradition amendment bill. Some of the participants at the assembly held signs encouraging participation in strikes that protesters plan on every Monday starting Sept 2, the first day of 2019/20 academic year.

Ho Hon-kuen, principal of Elegantia College, a local secondary school, called the assembly a one-sided event, instead of a discussion including different views.

One of the demands made by protesters this summer in the special administrative region-that the government release all lawbreakers arrested during protests-is "very dangerous" and goes against the city's longtime core value, the rule of law, Ho said.

Ho warned that such rallies are harmful to secondary school students, who are the future of the city, in developing their value system and ability to think in a comprehensive and diversified manner.

Ho, who also is chairman of Education Convergence, a leading association of local educators, also said it's unreasonable to stage a boycott based on a political stance in secondary schools. No one in the secondary education system, including students, teachers and school officials, should be pulled into any political dispute.

He said he hoped organizers would show some sympathy given the academic pressure on students and teachers.

Wong Kwan-yu, president of the Hong Kong Federation of Education Workers, said secondary school students should not be involved in political activities, as these juveniles are not mature enough to handle and comprehend complicated political issues.

Wong warned that their participation in the assembly on Thursday afternoon is a warning sign for the education sector and their parents.

These students could be easily incited, Wong said. Peaceful assemblies and strikes are usually the first step for anti-government protesters to incite immature students into making further moves, he cautioned.

But he said there are some common practices at secondary schools to manage students who are absent from classes. Parents have to submit an application if their children are not able to attend school, and the school will review whether the absence is reasonable.

On Tuesday, Secretary for Education Kevin Yeung Yun-hung reiterated that the Education Bureau is against any form of strike.

No one is allowed to use school as a place to express political demands, nor to draw innocent, underage students into a political vortex and use them as a means to increase the momentum and pressure against the government, Yueng said.

In a statement issued in the early hours of Thursday morning, it said that the vandalism that occurred was unacceptable and that it had filed a report with police in connection with the incident.

During the protest, two men were arrested for unlawful assembly outside Yuen Long Station, the police said on Thursday. More than 1,000 protesters had gathered inside and outside the Yuen Long MTR station late on Wednesday.

The protests expressed anger about an attack on commuters at the station on July 21.

Police dispersed the illegal assembly after repeated warnings were ignored, officials said. The protesters then retreated into the station and confronted the police.

The protesters used stickers to block the card readers at subway gates so commuters could not use their transit cards to get out of the station, according to a 31-year-old Yuen Long resident and commuter who identified himself as Chen. He and other passengers left the station through a security exit, as normal exits were blocked by protesters resisting the police.

A resident named Lilly Wang said she took the bus after hearing of the situation at Yuen Long Station. But the bus was stopped near Long Ping Station-1.4 kilometers from Yuen Long Station-because roads were blocked. She spent another 20 minutes walking home.

Shops along the street that usually are open until midnight were closed. Subway service to Yuen Long Station resumed on Thursday morning, but damage could still be seen at the station, Wang said.

Firefighting equipment such as hoses and extinguishers were taken out and used by protesters. Newspaper boxes and rubbish bins were knocked over. Graffiti on the walls had been temporarily covered with boards.

On July 21, at least 45 people had been injured when a mob in white shirts stormed Yuen Long Station. Twenty-eight people have been arrested in the incident.

Among them, two men were charged with rioting on Thursday for alleged participation in the July attack. They are set to appear at the Fanling Magistrates' Courts on Friday, according to police.