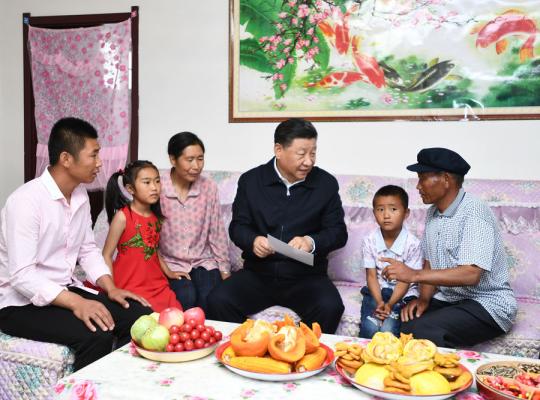 President Xi Jinping called for further efforts in poverty reduction as he concluded his four-day inspection tour in Gansu province on Thursday.

After hearing a work report by local government officials on Thursday, he said intensified efforts must be made in poverty reduction with an emphasis on solving prominent problems that affect rural residents, including access to compulsory education, basic medical services and safe housing, while ensuring they have adequate food and clothing.

Saying people's livelihoods must be ensured and improved, Xi added that the issues that matter to people, such as education, medical services and transportation, should be addressed.

On Wednesday morning, Xi visited the Huanghuatan community in Gulang county, home to people relocated from environmentally vulnerable and impoverished areas. There he visited Li Yingchuan's new home, with a clean yard and well-equipped kitchen and bathroom facilities.

Seeing the changes from a photo of Li's home before relocation, Xi said he was very pleased at the great progress achieved in people's working and living environments.

The CPC serves the people and works for the people, Xi said, and the happiness of the people is what the CPC pursues.

China has set the goal of eliminating absolute poverty nationwide by the end of 2020 as the nation vows to build a moderately prosperous society.

Since Xi became general secretary of the CPC Central Committee, he has made poverty alleviation a leading task. During his 20-plus inspection tours nationwide since then, he has always spent some time visiting impoverished regions, talking with and listening to locals and taking actions to reduce poverty.

Xi also visited a Yellow River management facility and learned of the ongoing work in terms of the management, protection and flood control of the river in Lanzhou, capital of Gansu.