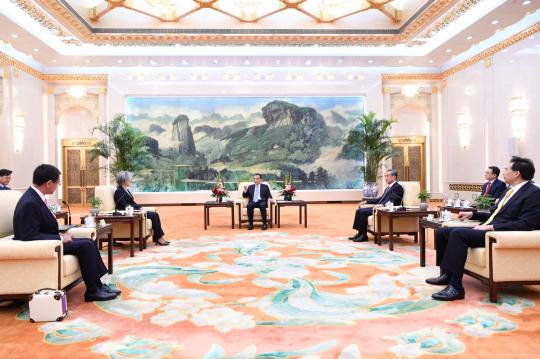 Premier Li Keqiang meets with Foreign Minister of the Republic of Korea (ROK) Kang Kyung-wha and Japanese Foreign Minister Taro Kono, who are here to attend the ninth meeting of foreign ministers of China, Japan and the ROK, in Beijing, capital of China, Aug 22, 2019. (Photo/Xinhua)

Premier Li Keqiang urged trilateral efforts on Thursday to reach a comprehensive and high-level free trade agreement among China, the Republic of Korea and Japan at an early date.

Li said that trilateral cooperation has made great progress in the past two decades since the mechanism was established. The importance and necessity of this cooperation should be further highlighted, he said, given its role as an economic "stabilizer" and "propeller" for the region and world.

China, the ROK and Japan should safeguard the rules-based multilateral trading system with the World Trade Organization at its core and reach an early free trade agreement to promote trade liberalization and investment facilitation, he said.