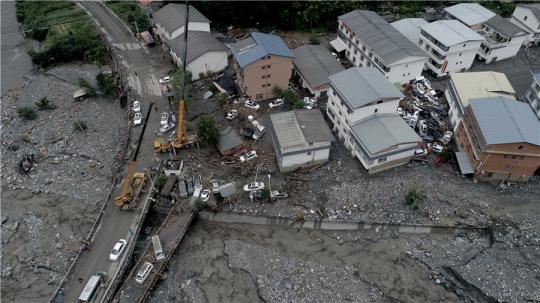 As of 7 pm on Tuesday, rain-triggered disasters had affected 17 townships in the prefecture, injuring six people, three severely, according to the prefectural emergency management bureau.

Aba has had about 25 days of rainfall since July 1, greatly increasing saturation of the soil, creating a situation prone to geological disasters like landslides and mudslides, according to Weather China, the weather forecast website of China Meteorological Administration.

West China Hospital based in Chengdu has sent a helicopter to the prefecture and taken those seriously injured to hospital.

By Tuesday night, more than 34,000 tourists had evacuated Wenchuan county, which was hit by multiple mudslides following heavy rainfall. Efforts to help roughly 13,000 tourists evacuate the area are underway. 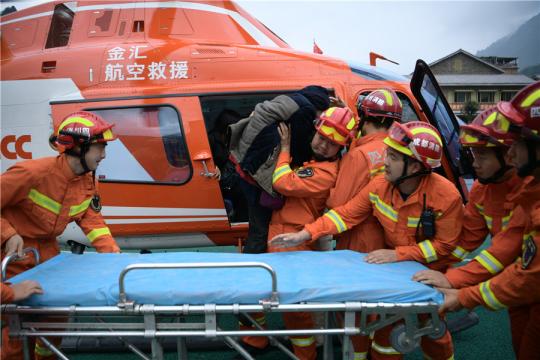 A helicopter transfers tourists and residents trapped at Longtan hydropower station, where eight are still missing, to safety in Gengda on Wednesday. LIU ZHONGJUN/FOR CHINA DAILY

About 280 firefighters are clearing highways across the prefecture. Villagers have also joined them. By about 2 pm on Wednesday, the highway between Wenchuan and Maoxian county had reopened, local authorities said.

Local authorities did not know when other roads would reopen. Water and power supplies remained disrupted in the affected counties, and firefighters are transporting fresh water to Lixian county and other places in need. Mobile companies are providing signals using satellite vans in areas like Wenchuan and Yingxiu.

The China Meteorological Administration said that rainfall will subside in western and northern areas of Sichuan, where most of the mudslides occurred.

However, experts with the administration said that the middle part of the province is more likely to have heavy rain in the next few days that could trigger mountain torrents, and governments and residents there should be prepared to control and prevent disasters.