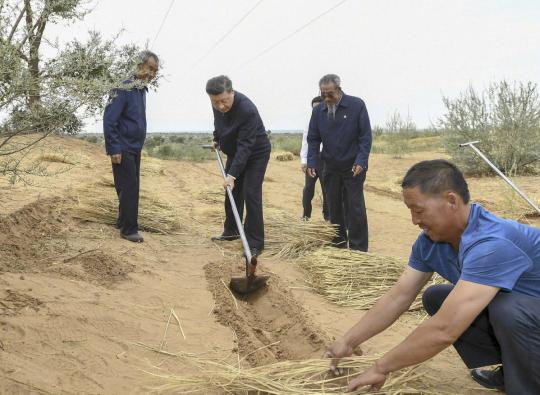 President Xi Jinping, also general secretary of the Communist Party of China Central Committee, works at an afforestation program in Gulang county, Gansu province. He learned about the latest developments in desertification control during the inspection tour. (XIE HUANCHI / XINHUA)

President Xi Jinping underscored the importance of ecological conservation in the nation's drive for high-quality development during his inspection tour of Gansu province on Wednesday.

Xi, also general secretary of the Communist Party of China Central Committee, visited a new community on Wednesday in Gulang county, which is home to people moved from rural mountainous areas due to ecological concerns, and he talked with the villagers about their livelihoods and the progress in poverty relief.

The president also inspected an afforestation program in a desert area of the province, where he learned of the latest developments in desertification control and environmental protection.

Thanks to local people's consistent efforts, more than 14,400 hectares of desert in Gulang have been afforested since 1981, China Central Television reported.

When Xi visited a horse ranch in Shandan county on Tuesday, a vast grassland on the north side of the Qilian Mountains, he was briefed by local government officials about the progress of ecological restoration in the area.

The Qilian Mountains are a vital ecological shield in western China, Xi said.

He expressed satisfaction with the effectiveness of the restoration work, and urged the local government to keep making efforts in this regard.

The Qilian Mountains are on the border of Gansu and Qinghai provinces. The 1.98-million-hectare nature reserve was designated a national protected site in 1988, but hundreds of mines in the area and construction projects have continued to take a toll on the environment.

In July 2017, the general offices of the CPC Central Committee and the State Council jointly released a document, urging the local governments to address the existing environmental issues in the nature reserve, such as the over-exploitation of mineral resources, illegal construction and operation of hydropower facilities, and excessive emissions by local enterprises. A number of local officials, including three at the provincial level, have been held accountable for the environmental violations.

The nation is at a crucial and challenging stage in its development endeavors, Xi told officials, and to achieve high-quality development, it needs to guide the people to be aware that lucid waters and lush mountains are invaluable assets.

China has set the goal of winning the critical battle of pollution prevention and control in 2020, and basically attaining a fundamental improvement in the environment and the goal of building a beautiful China by 2035.

When he visited Bailie School, a vocational school in Shandan county, on Tuesday, Xi stressed the importance of developing vocational education.

China's northwestern region lags behind in development due to its natural conditions, Xi noted, saying that although development conditions vary from region to region, there should be no difference in equality of opportunity.

China's economy needs the support of the real economy, which requires a large number of professional and technical personnel and craftsmen, Xi said, adding that vocational education can contribute a lot.