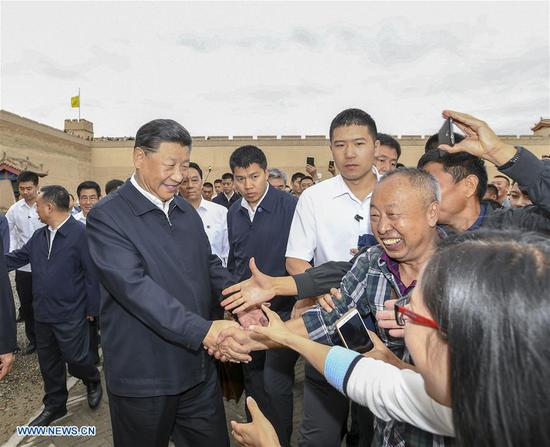 Chinese President Xi Jinping, also general secretary of the Communist Party of China Central Committee and chairman of the Central Military Commission, visits the Jiayu Pass, a famed part of the Great Wall in Jiayuguan City, during his inspection tour of northwest China's Gansu Province, Aug. 20, 2019. Xi also listened to an introduction to the historical and cultural background of the Great Wall and the passes in the Hexi Corridor, part of the ancient Silk Road in northwest China. (Xinhua/Xie Huanchi)

Xi Jinping, general secretary of the Communist Party of China Central Committee, has called for sound efforts in preserving the Great Wall as a symbol of the Chinese nation.

Xi made the remarks Tuesday while visiting the Jiayu Pass, a famed part of the Great Wall built in the Ming Dynasty (1368-1644), during his inspection tour to the northwestern province of Gansu.

During the visit, Xi observed the architectural layout and terrain of the Jiayu Pass and listened to reports on the preservation of the Great Wall and relevant cultural heritage as well as the inheritance and promotion of related history and culture.

He stressed that the Great Wall, as well as the Yangtze River and the Yellow River, are all important symbols of the Chinese nation and the spirit of the nation.

"We must attach importance to the efforts in keeping our history and culture alive and strong to preserve our roots for the survival and thriving of the Chinese ethos," Xi said.

The Great Wall, a UNESCO World Heritage Site, consists of many interconnected walls, some dating back 2,000 years. There are currently 43,000 sites on the Great Wall in China, which have a total length being more than 21,000 km.