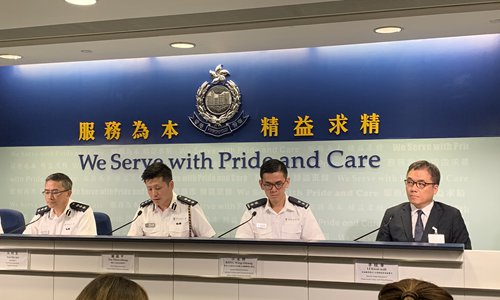 Several police officers speak with the press on Tuesday at the headquarters of the Hong Kong Police Force. (Photo: Chen Qingqing/GT)

Hong Kong police arrested a local resident Tuesday morning on suspicion of stabbing three people, which prompted some Hong Kong media to sensationally cite so-called witnesses identifying the suspect's "Chinese mainland accent" in a hyperbolic move that experts say will only exacerbate tensions in the relationship between Hong Kong and the mainland.

Tse stressed that police had launched an investigation into the case and would not indulge any criminal behavior. Kong Wing-cheung, senior superintendent of the branch, noted that the suspect was a Hong Kong resident. Since the incident was revealed, some Hong Kong media have intentionally hyped information from so-called witnesses saying the suspect had a mainland accent.

Anti-government groups have tried to mislead the public and turn the incident into a gangster attack related to the mainland. "As the situation in Hong Kong keeps escalating, anti-government groups are intentionally making the incident big to provoke the relationship between Hong Kong and the mainland," said Zhang Dinghuai, a professor at the Center for Basic Laws of Hong Kong and Macao Special Administrative Region of Shenzhen University.

The man was arrested on suspicion of stabbing two women, aged 26 and 35, as well as a man, 24, in a tunnel in Tseung Kwan O when anti-government protests rocked the city.

He was caught at the Lo Wo border crossing trying to flee the city, according to the Hong Kong Police Force. Some media cited witnesses whose identities could not be verified saying the suspect was wearing a blue top, implying he might be a member of pro-government group. Blue ribbons are associated with pro-establishment groups that opposed the Occupy Central protests in 2014.

Kwok Ka-ki, Hong Kong Civic Party lawmaker, was reported saying during a radio show that the suspect aimed at creating "white terror" through the incident, an apparent political intention.

This was groundless speculation, experts from the mainland noted, before police release the results of their official investigation.