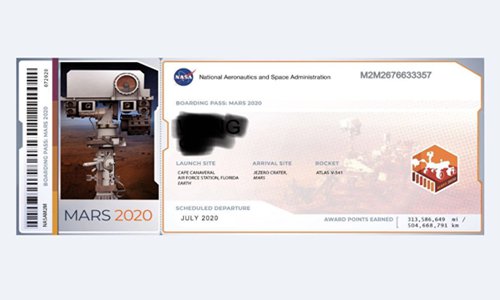 More than 243,100 Chinese people have signed up for a NASA mission to Mars, but only their names will get the chance to travel to the red planet.

The project has attracted more than 8.53 million submissions from around the world since it was launched in May, and NASA expects the mission will get underway in 2020.

Applications are being taken on NASA's website until the end of September and those who sign up will have their names stenciled on silicon chips that will journey to Mars. People can also print off a boarding pass.

NASA said the mission, called Mars 2020, is expected to launch as early as July 2020, and is scheduled to land on the planet in February 2021. Along with sending people's name to Mars, a rover will also search for signs of microbial life, record the geology and climate of Mars and collect samples, said NASA on its official website.

The number of Chinese participants was fifth on a list of countries and regions, behind Turkey, India, the US and Iran.

Some Chinese Net users also signed up their lovers and idols. They posted photos of their boarding passes on social media and called them "the most romantic gift from the universe."

"It's great to have my name flying to Mars. I think this kind of engagement with a space flight makes me really excited as I realize all the participants and human destiny will always be intertwined," Zheng Qinyuan a Nanjing-based college student told the Global Times on Monday.

"We are humble and tiny compared to the universe. But as I think about thousands of years in the future when my name will still have a place in the universe, it makes me feels warm," said a Net user on Twitter-like Sina Weibo on Monday.

"See you guys later on Mars," said another.