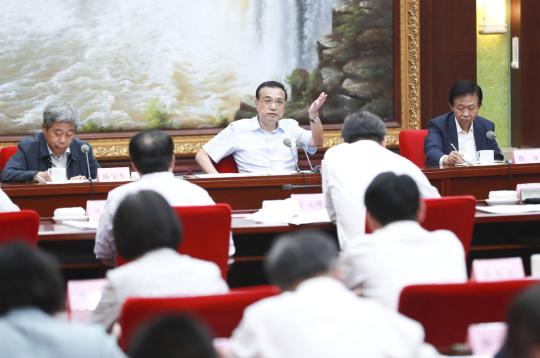 Premier Li Keqiang, also a member of the Standing Committee of the Political Bureau of the Communist Party of China (CPC) Central Committee, presides over a symposium on stabilizing employment in Harbin, capital of northeast China's Heilongjiang province, Aug 19, 2019. (Photo/Xinhua)

Li, who is on an inspection tour in Heilongjiang province, made the remark at a symposium in Harbin, the provincial capital, with officials from several provinces including Hebei, Shandong, Hunan and Shaanxi in attendance.

The premier said the national economy maintains general forward progress while ensuring stability in the face of the complex domestic and international landscape, with 8.67 million new jobs being added nationwide in the first seven months.

However, according to the National Bureau of Statistics, the surveyed urban unemployment rate was 5.3 percent in July, 0.2 percent higher than the previous month.

Employment is the first consideration for people's livelihood, and priority should be given to stabilizing employment, he said.

Saying the nation needs to provide around 18 million new jobs annually, the premier stated that stabilizing employment is still an arduous task amid the complex domestic and international situation.

He called for further efforts to put into practice policies in support of the real economy, expand demand, deepen reforms in streamlining administration, delegating authority and improving regulations and services to boost market vitality.

He said 100 billion yuan ($14.2 billion) of the unemployment insurance fund is available for enhancing employment skills training and the capital should be well used.

Li called for a more active role for the nation's over 2,000 technical colleges that would allow them to cultivate more skilled professionals.

He urged local governments to shoulder their responsibilities, stabilize employment and ensure people's livelihoods, particularly those in need.