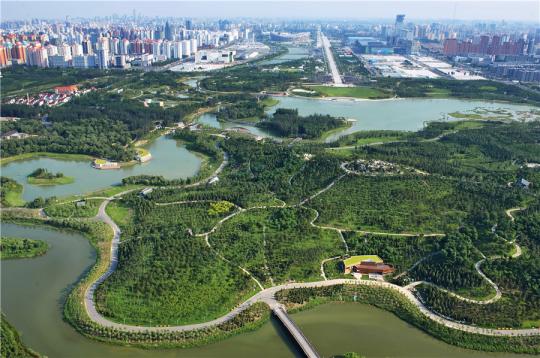 The most crowded place in Beijing on a typical weekend morning is not the Sanyuanli Market or the Sanlitun shopping area, but a park near the North Fifth Ring Road.

Entering through the park's south gate, you'll typically see a group of people to the left warming up for exercises, chatting about their fitness levels, while to the right you may see teams of runners pass, sweating heavily.

A vacant area just 14 years ago, Olympic Forest Park was built ahead of the 2008 Beijing Summer Olympics as a leisure area for athletes and coaches away from intense competition at National Stadium, also known as the Bird's Nest.

After the Olympics, the park quickly became a highly popular public recreation facility, providing a variety of ways for people to relax.

According to the Olympic Park Management Committee, the number of visitors has remained at some 12 million annually for five years, and at peak times the park hosts about 200,000 people a day. 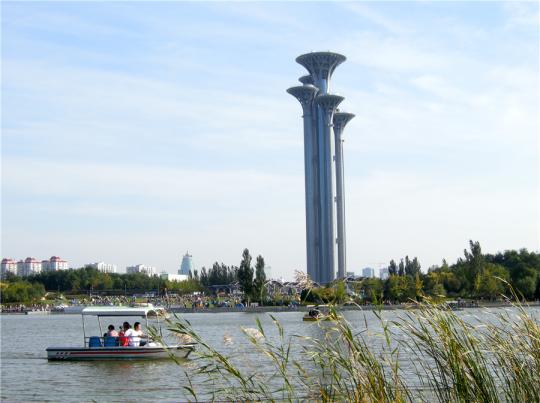 The park is a popular venue for people to relax. JIN WEN/FOR CHINA DAILY

The busiest weekend times are mornings, when runners complete up to five laps before lunch, while bird-watchers are busy with their cameras in the wetland areas.

Fan Zhenhe, who runs barefoot and has jogged in the park twice a week for four years, said he usually leaves the venue before 11 am to visit a restaurant or coffee shop, which the park lacks.

He started running barefoot in 2016, encouraged by the park's smooth plastic running track. "I read an article back then that said barefoot running and walking help accelerate blood circulation, which is good for health," he said.

"The park's environment also made me want to get closer to nature; another reason I decided to run barefoot."

As Fan spoke, a large group of blind people, led by volunteers with a pulling rope, shouted slogans and marched along a pathway. Even a sudden jolt failed to slow their pace.

Fan also acts as a volunteer to such groups, training with fellow members twice a week, on Wednesday and Saturday mornings.

Next to the crowded running track, several trails lead to the central area of the park, where the Olympic Lake is located.

Some visitors who perform tai chi often head to these trails and grasslands to find quiet areas, usually alongside streams and lakes. 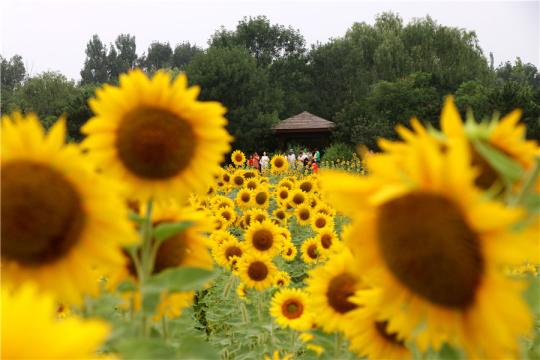 Hu Jie, the park's chief designer and vice-president of the Beijing Tsinghua Tongheng Urban Planning and Design Institute, said he used the work of Laozi, the sixth-century BC philosopher known for writing the masterpiece Tao Te Ching, in drafting the park's design.

"The ideology that man follows the Earth and the Earth follows heaven blended perfectly with the park's natural environment," he said. "I thought that to attain sustainability and environmental balance, the design should find a way to involve both human activities and animal behavior."

Many plans were submitted to the Beijing Municipal Government and the Beijing Organizing Committee for the Games of the XXIX Olympiad, or BOCOG, with hundreds of them rejected.

Hu said government officials put forward a specific request for the design that the capital's central axis should end within the park area.

From the south, the 7.8-kilometer central axis runs north, passing through Tian'anmen Square and the Forbidden City before ending in the north of the city.

What is now the Second Ring Road used to form a complete imperial city wall system which, along with major roads, provided protection. "As the city expanded into the surrounding areas, forming a northern border became an urgent problem to solve," Hu said.

He proposed an end to the central axis by using Chinese-style parks at Yangshan hill, an artificial site in the southern part of Olympic Forest Park. This 60-meter-high hill was finally selected. 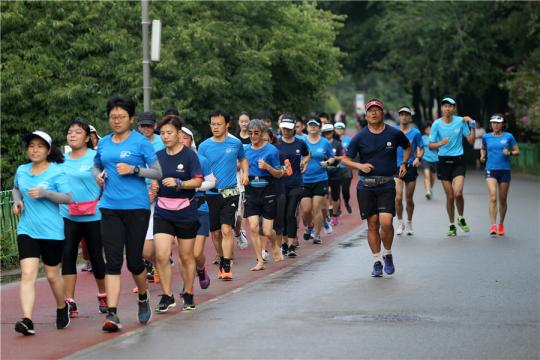 Covering 608 hectares, the park is home to 208 different wild animal species, including the yellow-bellied weasel and hedgehogs, along with numerous types of birds. Tourists visit the venue throughout the year.

According to the Olympic Park Management Committee, protecting the ecosystem is the top priority, and the park is designed to act as Beijing's "green lung"－an area for leisure and entertainment that meets the increasing demand from local residents for green space.

When the park was completed in June 2008, the proportion of forest area in Beijing rose to 67 percent and carbon sequestration－a process by which carbon dioxide is removed from the atmosphere and held in solid or liquid form－reached 4,763 metric tons per year. The park releases 5,208 tons of oxygen annually, according to the management committee.

As dusk falls at the park, young men play basketball on outdoor courts, retirees dance in large groups and families use the walkways to exercise. Lovers often sit along the trails, listening to guitar players.

Since 2014, Zhang Yu, 40, an illustrator at a nature and geographical magazine in Beijing for young readers, has spent more than 100 nights in the park during summer and autumn, searching with a flashlight for signs of hedgehogs.

He even considered bringing a tent to the park late at night to ensure he had sufficient time to track the creatures.

According to Zhang, untended land in the park provides the perfect habitat for hedgehogs, and they usually rest and sleep on the edges of grassy areas.

Wang Zhou, 60, from Beijing, who has been a keen bird watcher since 1996, said, "We are lucky to have Olympic Forest Park as one of the areas to observe birds' behavior."

Wang, who worked in finance before retiring, said she used to watch birds to ease the pressure of work.

"Every time I saw the birds, especially some new species that suddenly appeared, I felt a sense of satisfaction and my spirits quickly rose," she said.

Wang has also watched birds at other parks in Beijing, such as the Old Summer Palace and the Temple of Heaven.

"Compared with other places, Olympic Forest Park has bushy shrubs and untrimmed plants, providing a better environment for wildlife," she said.

Wang said that when it opened to the public in 2008, the park had relatively few species of birds, as the natural landscape had not been "recognized" by migratory species and they rarely visited the site to rest and nest.

However, with the growth of plants and the expansion of the park, the environment, including grasslands, hills and forests, gradually became richer, and the park turned out to be an ideal habitat for birds. 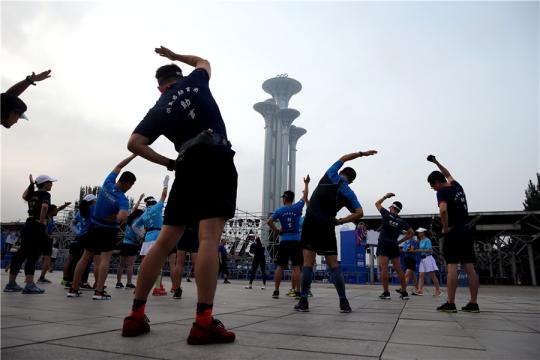 He Weijia, general manager of Zhongda Yihe, the company responsible for the park's water system, said the venue's design features an integrated system that retains rainwater in its lakes for recycling after filtration.

"Thousands of tons of city sewage have also been recycled, and small sewage treatment stations can be seen everywhere in the park," he said.

An artificial sewage treatment wetland covering more than 20,000 square meters in the park has proved beneficial to the environment, he added.

Maintaining such a large area of parkland is not easy.

Wang Chun, former director of the Olympic Park Management Committee, has said in media interviews that even though there has been no entry fee since the park opened, the government subsidizes each visitor to the tune of 11 yuan ($1.56) to cover maintenance costs.

The Chaoyang district government, along with the Beijing Municipal Government, provide about 200 million yuan a year to maintain the park through sanitation services, cleaning the lakes and other areas, and providing lights in public areas.

"The overall Olympic Forest Park maintenance cost is not lower than that for Tian'anmen Square every year," Wang said.

Hu, the chief designer, said the park, which is reputed to be Asia's largest urban green landscape, has attracted the nation's attention, and the Beijing Municipal Government spared no efforts in building the venue, investing 2.2 billion yuan in 2005.

However, he said the Olympic organizing committee had paid less attention to the park after the 2008 Summer Games, adding that cafes and restaurants in the draft design had not been included when the venue was being built.

Commercial operation of the park has also not been realized, and there are only a few places where runners and walkers can buy bottled water at the venue, he added.

In addition, all major activities held in the park must be reported to the local police station.

"I hope the park will explore new maintenance methods and make full use of its current resources, as an important part of building Beijing into a world-class city," Hu said.

"Just like Central Park in New York City in the United States, Olympic Forest Park will become a mustgo place for Beijingers in the future."