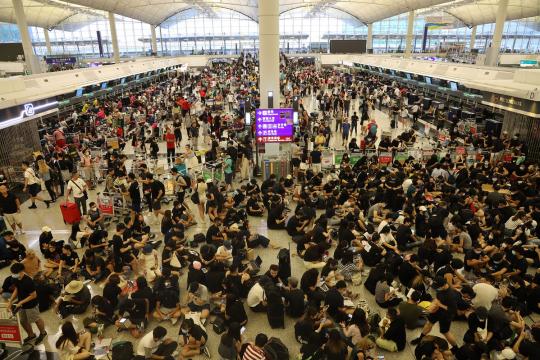 After storming and vandalizing the Legislative Council building and blocking roads in Hong Kong in the past three months, protesters took the city's international airport, a global aviation hub, as a key target on Aug 9-13.

Thousands of protesters occupying the arrival and departure halls confronted passengers, blocked travelers from reaching their flights and disrupted airport operations. As a result, the airport authority canceled or delayed hundreds of flights on August 12 and 13.

Lau Siu-kai, vice-president of the Chinese Association of Hong Kong and Macao Studies, the nation's leading Hong Kong affairs think tank, said the protests in the airport were meant to pressure the Hong Kong SAR's government to the maximum extent.

Across the world, few protesters would choose to target airports, considering the huge losses it may cause, said Lau. "They (Hong Kong demonstrators) did so because they are determined to drag Hong Kong to an abyss and make everyone in the city suffer."

The protesters clearly knew that the airport is of vital importance to Hong Kong's status as a global aviation hub, Lau said. One of the world's busiest airports, it serves about 74 million passengers annually, with flights reaching more than 200 international destinations.

In May, Hong Kong Secretary for Transport Frank Chan said the airport contributes 5 percent to the city's GDP.

By continuously paralyzing the airport's operations, the protesters want to give a heavy blow to Hong Kong's transportation, tourism and retail industry, thus severely denting the city's economy and international reputation, Lau said.

The airport opened 20 years ago and has become a symbol of modern Hong Kong. It handles 1,100 passenger and cargo flights daily.

Nicholas Chan Hiu Fung, a lawyer who is also a Hong Kong deputy to the National People's Congress, China's top legislature, said another goal for the protesters is to grab the world's attention.

"The transportation situation of major airports in the world is always easy to catch headlines, not to mention when there are demonstrations or violent clashes," Chan said.

By occupying the airport, Hong Kong protesters had an ideal chance to promote their agendas to the international community, which could also provide more excuses for external forces to interfere in China's internal affairs, Chan said.

The lawyer also blamed the protesters for taking risks with other innocent peoples' lives to achieve their goals. They chose the airport because they were aware that it is difficult for police to enforce laws there in the presence of so many strained passengers, Chan said.

"Considering the dense crowds and limited space of the airport, any violent clashes may lead to mass casualties," he said. "Such a tactic is really despicable."

At the airport on Tuesday night, protesters detained a man from Shenzhen whom they suspected of being an undercover police officer. They also set upon and beat a reporter from the Beijing-based newspaper Global Times.

CNN reported that Hong Kong International Airport is frequently named one of the top five airports in the world, is a repeat winner of Skytrax's World's Best Airport Dining award, and has been the world's largest cargo airport for eight years in a row.

Blocking of the airport by protesters led to monetary losses for airlines and travelers.

CNN quoted Geoffrey Thomas, editor in chief and managing director of AirlineRatings.com, as saying that blocking the airport was a disaster for Hong Kong that will cost tens of millions of dollars.

Danny Wong Kwok-keung, director of Hong Kong-based Cargo Freight Services Ltd, said flights carrying fresh produce from Japan and the Philippines were put in a difficult position when protesters blocked the Hong Kong airport. Since they could not land in Hong Kong, some had to land in Shenzhen at the risk of their perishable foodstuffs going bad.

Frankie Yick Chi-ming, who represents transportation interests in the Legislative Council, warned that protests at the airport last week could bring negative consequences to the city's freight business.

"If global exporters opt for other airports in Asia to ship their cargo, it would mean a loss of business for the Hong Kong airport that could never be recovered, " Yick said.

Eddie Leung Tin-fu, president of Paper Communication Exhibition Services, was among those who had to reschedule a business trip due to the airport closure.

"I was supposed to fly to Beijing on Tuesday and back to Hong Kong on Wednesday. But both of the flights were canceled and I had to transit through Shenzhen," the entrepreneur said.

Leung, an insider on conventions and exhibitions, said some clients had postponed plans to go to Hong Kong for safety reasons.

Several events planned at AsiaWorld-Expo — the exhibition and concert facility located near the airport — have been canceled amid concerns by guests and visitors that they might have difficulty arriving in the city due to the protests.

Secretary for Hong Kong Commerce and Economic Development Edward Yau Tang-wah said on Wednesday that the number of travelers to Hong Kong had fallen more than 30 percent during the first 10 days in August compared with the same period last year. The hotel occupancy of some local hotels plummeted between 30 and 50 percent, he added.