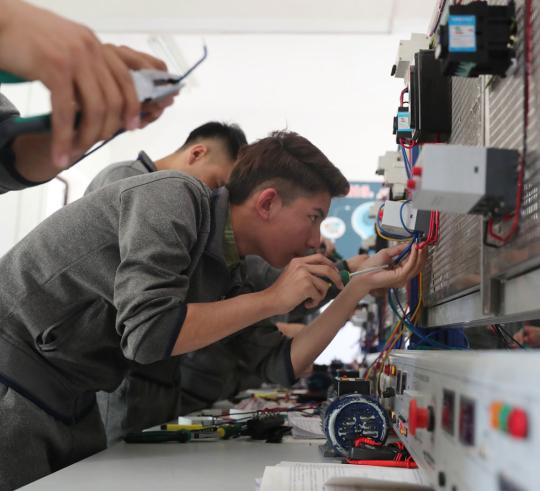 Vocational education and training centers in the Xinjiang Uygur autonomous region－the key battleground in the fight against terrorism and extremism in China－have been effective in eliminating conditions that foster terrorism and religious extremism, a white paper said on Friday.

For some time, Xinjiang－especially its southern region where religious extremism has had a long and widespread presence－has suffered badly from frequent acts of terrorism. Large numbers of people were involved and even more were affected. The scale of the problem posed a serious challenge to China, said the white paper, released by the State Council Information Office.

By exploiting people's religious beliefs, extremist forces spread extremism through Xinjiang's large religious population by deliberately distorting doctrines. They incited people to overthrow secular governments and establish theocratic states, according to the white paper. Social and economic development in the region has also suffered as a result, it said.

Addressing both the symptoms and root causes, Xinjiang has established vocational education and training centers. These facilities cater to those who were at risk of planning or participating in terrorist or extremist activities but whose activities fell below the threshold of actually constituting serious crimes and had not yet caused real harm to society. These people are provided lessons in standard spoken and written Chinese, educated about the law and trained in various vocational skills, the white paper said.

"The education and training is never a measure to limit or circumscribe freedom of the person as described by some," it said.

In 2017, Tunisa Matruz from Moyu county, southern Xinjiang's Hotan prefecture, met some people who told her that women were forbidden from using makeup and they should cover their face and body and stay at home and not enter the workforce.

"Only in this way could I go to heaven after death," the 26-year-old said. "Under those people's influence, I started doing as they told me and forced women around me to do so, too. If anyone refused, I would curse or beat them."

She later became a trainee at the vocational education and training center in Moyu county. After spending three months at the center, she graduated and is now running a beauty salon with the skills she mastered at the center.

"The training aims to help people improve their communication skills and improve their legal acumen so they can steer clear of terrorism and extremism. The courses also equip people with practical working skills and make it easier to find jobs after graduation," he said.