Market rises despite volatility in U.S. 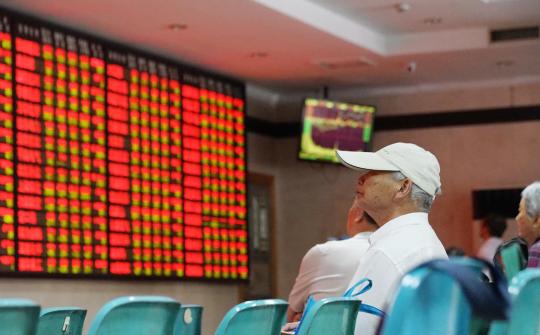 An investor checks share prices at a securities brokerage in Nanjing, capital of Jiangsu Province. (Photo provided to China Daily)

China's stock market rose for the third consecutive day on Friday, appearing to be unaffected by the sharp market volatility in the United States amid investor fears about a global recession and uncertainties over Sino-U.S. trade tension.

The benchmark Shanghai Composite Index rose 0.28 percent to close at 2823.82 points. The gain was mainly led by companies in consumption-related sectors including tourism, restaurants, food and beverages. The index wrapped up a 1.8 percent weekly gain on Friday.

Analysts said China's A-share market has digested some of the negative external factors, including turbulence in the U.S. market, and investors' sentiment toward Chinese shares has been improving as the government has vowed to take additional measures to boost consumption and shore up growth.

"The Shanghai market started a correction at the end of July. We believe that the market has already priced in the negative factors. And investors' expectations are becoming increasingly strong that policymakers will roll out more measures to stimulate the economy," said Zhang Gang, an analyst at Central China Securities.

The National Development and Reform Commission, the top economic regulator, said on Friday that it will roll out a plan to boost disposable income this year and in 2020 to spur consumption as the economy slows.

Recent turbulence in the U.S. stock market has caused volatility around the world, including in China's A-share market. U.S. equities suffered heavy losses on Wednesday with the Dow Jones Industrial Average dropping 800 points, or 3.1 percent, in the worst performance this year.

The plunge was triggered by developments in the U.S. bond market on Wednesday as the yield on the 10-year U.S. Treasury bond briefly slid below the yield on the two-year note for the first time since the financial crisis in 2008.

This event, called a yield curve inversion, happens when it costs more for people to borrow money for the short term than for the long term, which is not normal, as it indicates that investors expect the economy to slow. Such an inversion is seen by analysts and traders as a predictor for an economic recession. In the past four decades, with only one exception, each time the yield curve has inverted, the U.S. economy has entered a downturn within 18 months, according to estimates by the asset management firm Schroders.

Looking into the near future, analysts say they think that China's A-share market will continue to experience some volatility as investors' sentiment remains vulnerable to news about whether a U.S. recession is on the way and the likelihood of the escalation of the China-U.S. trade conflict. But analysts remain bullish about the A-share market for the longer term as Beijing's policies will become more accommodative in boosting demand and consumption.

While external uncertainties may continue to rattle the A-share market in the short term, Chen Zhizhong, an analyst at Everbright Securities, said that investors' attention is gradually shifting to domestic policies that are expected to be more supportive, especially for smaller and innovative companies.

Moreover, the general trend of China further opening its financial sector has not changed, which means that the market will continue to draw overseas capital, providing long-term support for the A-share market, Chen said.