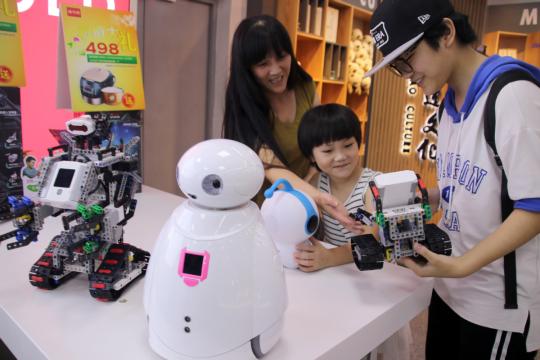 A customer looks at an intelligent education robot at a shop in Suzhou, Jiangsu province. (Photo by Wang Jiankang/For China Daily)

Maintaining a reading of 115 from Q1, an index reading of above 100 indicates consumers are optimistic regarding local job prospects, personal finance and willingness to spend, a Nielsen report showed.

"As China's supply-side structural reform deepens along with policies to ensure the stability of employment, the financial sector, foreign trade, foreign and domestic investments, the country's economic structure has constantly improved and the endogenous power of its economy has kept growing," Justin Sargent, president of Nielsen China, said.

Sargent said this highlights the resilience and vitality of the Chinese economy and effectively promoted the country's long-term stable development.

The Nielsen report also found consumers' personal financial situation and willingness to spend have been robust.

In Q2, the sub-index for personal finance increased from 70 in Q1 to 71, hitting a historical high, and local job prospects and willingness to spend came in at 77 and 61 respectively, the report said.

Sargent said the Chinese government's efforts to further cut tax and lower fees have reduced the cost of enterprises and enhanced their vitality.

The consumer trend index for different regions in China remained stable, reaching 124 in the eastern region while the northern and southern regions achieved steady growth in the past three quarters, the report showed.

In addition, indices for first, second and third-tier cities all have increased steadily in the past four quarters, particularly in the past six months, driven by better personal finance and rising willingness to spend, the report said.

"In the first half of this year, people's livelihood indicators such as employment, costs and income all performed well. Among them, prices were basically stable, and the supply and demand of the whole market balanced, boosting residents' willingness to spend," Sargent analyzed.

He said the consumption structure of residents was further improved by a change in consumption concept and mode, which gradually released the potential of service consumption demand.

Cost performance is the main reason why consumers choose domestic products, but for them, quality also weighs in higher than price.