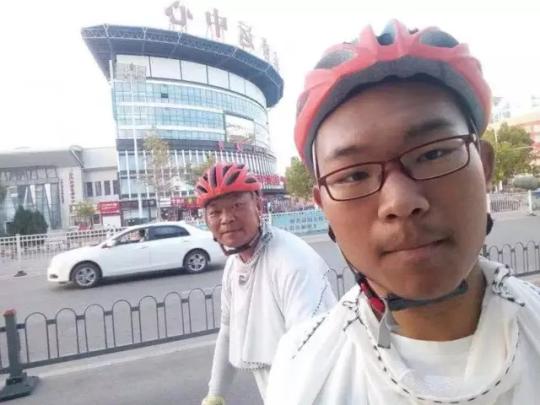 (Screenshot of Pear Video shows Meng Fankun and his father.)

On Aug 1, Meng and his father set out from Linquan to Beijing and rode all the way to the university to register. The journey was over 800 km, and passed through Henan, Shandong, Hebei provinces and other places, with the capital city as final destination.

During the trip, Meng even got a suntan.

"My dad and I stayed at affordable inns at night. I made plans before we left, so the bad weather, bicycle problems and traffic were all expected," Meng said.

After receiving his admission letter, Meng began to carry out a plan he had thought about for half a year: riding to the university.

To accomplish this, Meng decided to earn some money to spend during the journey. So he took a job at a restaurant and earned 4,000 yuan in his summer vocation.

Talking of his original intentions, Meng said he wanted to sharpen his persistence and fearless spirit before beginning his studies.

Concerning over possible safety issues during the journey, Meng's father, 44, decided to join his son.

The younger Meng has always been a sports fan. He said when he was in high school, he liked running on the playground every day. Cycling was also one of his favorites. He saw many new things during the trip, improved his ability to schedule and deal with emergencies.

"I think I experienced a lot during the journey. It was unforgettable," he said.

His story has won wide praise on the internet. "What we lack is the courage to try what we want in life," one user said on the popular Chinese social media platform Weibo.