Flights from Daxing airport on sale

Tickets are now available for flights at Beijing Daxing International Airport, which is scheduled to begin operations before Sept 30.

On various travel websites, passengers can book tickets from the new airport to many domestic destinations such as Shanghai, Xiamen in Fujian province, Guangzhou in Guangdong province, Chengdu in Sichuan province and Kunming in Yunnan province.

Compared to the flights departing from Beijing Capital International Airport, which is located in the northeastern part of the city, the prices at the new airport are generally cheaper, industry observers said. 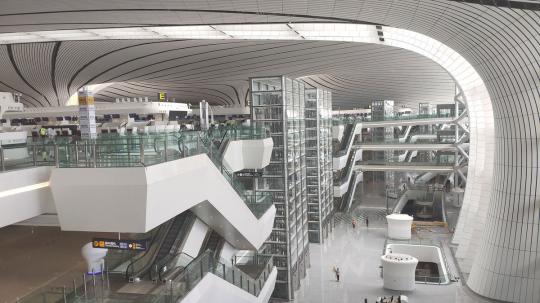 Elevators and escalators inside the seven-story terminal hall of the Beijing Daxing International Airport. (Photo by Zhang Wenfang/chinadaily.com.cn)

Flights to Guangzhou from Daxing airport, for instance, cost less than 1,300 yuan ($185) for economy class while the lowest price at the Capital airport is nearly 1,800 yuan.

Before the winter season starts in November, domestic flights will be carried out solely by China United Airlines, a wholly-owned subsidiary of China Eastern, which is also the first airline to transfer its operations to Daxing airport from its current headquarters at Beijing Nanyuan Airport, the company said.

So far, most of the booked trips will be made during the weeklong National Day holiday from Oct 1 to 7, according to the company.