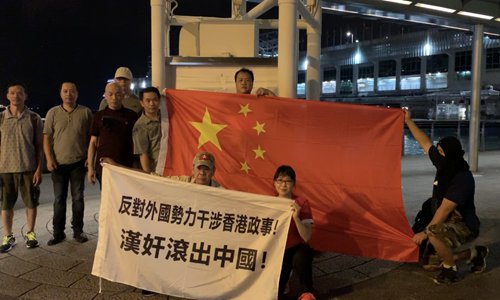 As tensions simmer in Hong Kong, many residents said they were expecting life to return to normal and hoped the government and the police, who are under extreme pressure, can fulfill their duty to bring violent criminals to justice.

Those most affected are the Hong Kong people themselves and the rioters are losing ground as their violent approaches are opposed by an increasing number of people who love the city and the country, observers said.

The move came after violent opposition protesters removed the flag and threw it in Victoria Harbour Monday night, the second such act in two days.

A spokesperson for Harbour City, a major shopping mall that failed to effectively protect the flag, told the Global Times Tuesday that it will increase security to protect the flag.

Raymond Lam, one of the Hong Kong residents who initiated the campaign, said that it was not enough to solely rely on people like him to protect the national flag.

"Authorities need to strictly punish those who violate the law," Lam told the Global Times.

Tian Feilong, an associate professor at Beihang University in Beijing and an expert on Hong Kong studies, believes that after a series of violent and illegal activities opposing national sovereignty and insulting the Chinese national flag, the protesters and opposition groups in Hong Kong are losing public support.

More and more Hong Kong people have realized that "there will be no good end for the city" if the majority still tolerate or even support the protesters to provoke and challenge the whole country, he said.

"Public opinion is shifting constructively" Tian said. "The authority of the government and police will be recovered if more people get reasonable and become aware of the potential serious consequences."

A Hong Kong resident who requested anonymity told the Global Times that those who remained silent "did not object to peaceful demonstrations at the beginning, but as the protests escalated, many citizens started to voice their opposition."

Experts noted that after the city was almost paralyzed by the so-called three strikes campaign on Monday, it seemed relatively calm, with a potential conflict in North Point not occurring on Tuesday after a clash on Monday night.

A video obtained by the Global Times showed on Monday night, a group of black-clad protesters fighting with metal rods and hurling objects at a dozen men with bamboo poles who took whacks at the protesters. The protesters chased them into a building and broke an apartment window.

There was speculation rioters would seek revenge around 4 pm on Tuesday at North Point. The Global Times reporter saw the police take precautions by maintaining order at the nearby subway station. Some stores had already closed.

In venues such as bus stations and viaducts, insulting slogans targeting Fujian communities were painted by extremists and rioters.

Many residents nearby did not want to talk about the violence on Monday night. A few expressed hopes that the police could punish the rioters while others worried that the rioters might come again.

Lo Man Tuen, permanent honorary president of the Hong Kong Federation of Fujian Association, told the Global Times that some compatriots from Fujian were forced to defend themselves after being hit.

Police should punish the violence and peace should be returned to the city, Lo said.

On Tuesday, Xu Luying, a spokesperson of the Hong Kong and Macao Affairs Office of the State Council, denounced violence and strikes undertaken by Hong Kong opposition and rioters.

The so-called three strikes campaign was by no means a normal expression of demands, but extremely violent criminal behavior aimed at messing up and destroying the city, Xu said at a press conference.

Yang Guang, another office spokesperson, said that "With firm and steady support of the central government and the support of all Chinese people, including Hong Kong compatriots, the Hong Kong government and Hong Kong police have the full ability to bring violent criminals to justice and restore social order and peace."

Yang also warned the lawbreakers not to mistake restraint for weakness. "Do not underestimate the power of justice in Hong Kong to safeguard the region's stability and do not underestimate the strong resolve of the central government and all Chinese people to safeguard the prosperity and stability of Hong Kong, as well as the fundamental interests of the country," he said.