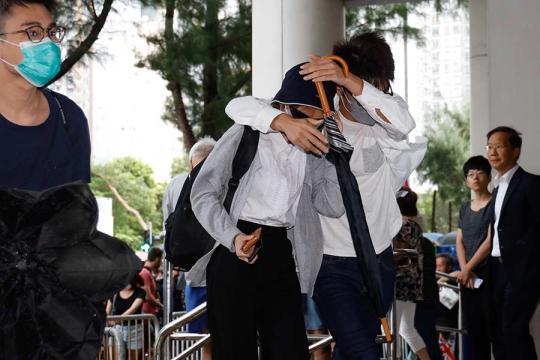 A defendant (center left) arrives at the Eastern Magistrates' Courts in Hong Kong on Wednesday. Hong Kong Police have charged 44 people for rioting as of Tuesday, following an illegal assembly held in Western District on Hong Kong Island on Sunday. (Photo provided to China Daily)

No compromise should be allowed to the "black sheep" in Hong Kong who were trying to disrupt and even destroy the city with violence, Tung Chee-hwa, vice-chairman of the Chinese People's Political Consultative Conference National Committee, the nation's top political advisory body, said on Wednesday.

Addressing a luncheon held by Our Hong Kong Foundation, one of Hong Kong's leading think tanks, Tung, who was the first chief executive of HK, called on the city's general public to draw a clear line against violence and support the police to safeguard the dignity of the rule of law.

The SAR government would never ignore such violence as Hong Kong is a city of the rule of law, Tung said, and the government, police and judges must carry out their duties.

"Above all, all citizens must obey the law," Tung said.

Analyzing the reasons behind the weekslong anti-government protests, Tung said that due to the long-term impasse in livelihood issues such as housing problems and a widening income gap, some young people could not envision their future and thus choose to vent their anger through "street politics".

He urged the SAR government to shift its focus immediately to livelihood issues that have plagued Hong Kong for years.

"The solutions cannot be delayed any longer," he said.

Tung said he believed that the public should be assured that the government will carry out bold reforms to restore public confidence.

Tung also reiterated he is a firm believer of a faithful implementation of "one country, two systems" in Hong Kong, as well as the principle of Hong Kong people governing Hong Kong with a high degree of autonomy.

The recent demonstrations have proved that Hong Kong citizens' freedom of speech and assembly is guaranteed by the Basic Law, the city's constitutional document, Tung said.

However, some anti-China forces－especially those in the United States and Taiwan－took advantage of the differences between Hong Kong and the mainland's political systems to incite destruction of the SAR's relationship with the mainland, he said.

Hong Kong people should avoid being used as "pawns" when these forces try to use it as a base for resistance to the Chinese central government.

Also on Wednesday, 43 people charged with rioting during an illegal assembly in Hong Kong's Central and Western district on Sunday night appeared before a magistrate at the Eastern Magistrates' Courts in Sai Wan Ho.

The charges are the most serious leveled since protests against the now-suspended extradition bill began to escalate last month.

Of the defendants, a 33-year-old man was also charged with assaulting a police officer.

They were released after each paid HK$1,000($127.8) bail in cash. During and after the hearings, masked protesters gathered in the lobby of the court and shouted slogans. Hundreds of protesters also crowded the court entrance. Some of them opened umbrellas to shelter defendants from getting filmed as they stepped out of the court.

The Hong Kong police's Tuesday night announcement of the charges filed against the radical protesters arrested during the Sunday assembly swiftly sparked demonstrations, besieging police stations in Tin Shui Wai and Kwai Chung, where some of the protesters had been in custody.

Some threw umbrellas and other objects at police officers, who used pepper spray to disperse the crowd.

A total of 11 people were injured in the subsequent clashes.