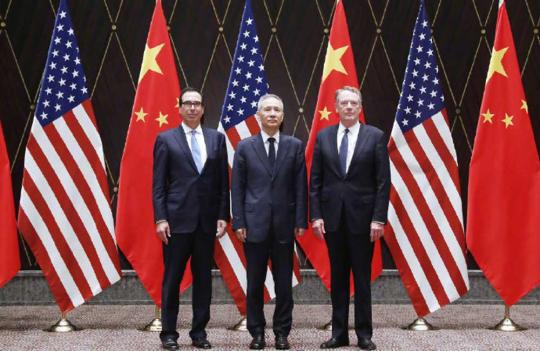 China and the United States will hold the next round of high-level economic and trade consultations in the U.S. in September, following their "constructive" talks in Shanghai.

Vice-Premier Liu He, U.S. Trade Representative Robert Lighthizer and Treasury Secretary Steven Mnuchin met for the 12th round of high-level Sino-U.S. trade negotiations in Shanghai on Tuesday and Wednesday.

Both sides conducted "sincere, efficient and constructive" in-depth exchanges on major economic and trade issues of common interest, the Ministry of Commerce said in a statement.

They also discussed China's possible purchase of more U.S. agricultural products based on domestic need, and the U.S. creation of favorable conditions for the transaction, according to the statement.

Yang Weiyong, an economics professor at the University of International Business and Economics in Beijing, said it is an encouraging sign that the latest meeting concluded constructively.

"But there's still some way to go for the two sides to finally reach a deal. The key to advancing future China-U.S. economic and trade consultations lies in sincerity," Yang said.

Hua Chunying, a spokeswoman for the Ministry of Foreign Affairs, said at a news conference on Wednesday that the U.S. should show more sincerity and integrity in economic and trade consultations.

She said that only when the U.S. shows full integrity and sincerity and conducts the talks in a spirit of equality, mutual respect and mutual understanding, are consultations likely to make progress.

The U.S. and China, the world's two largest economies, have been addressing bilateral trade differences for over a year. The talks on Tuesday and Wednesday were the first since the two countries' top leaders agreed in June to resume consultations.

Chen Dongqi, an economist at the National Development and Reform Commission's Academy of Macroeconomic Research, said the U.S. should be aware that using tough talk and other tactics to support or cheer on its negotiating team will only bring uncertainties for businesses on both sides and damage the mutual trust built for decades between the two countries.

"The U.S. should add more credible and reasonable factors into the talks rather than putting extreme pressure on negotiating partners, as well as on Chinese high-tech companies," Chen said.

To safeguard its interests, China has changed its stance from previously maintaining an amenable approach in trade and economics talks to taking a relatively tough stance, an action forced by the U.S.' repeated changes of attitudes and actions, said Yan Jinming, an economics professor at Renmin University of China.