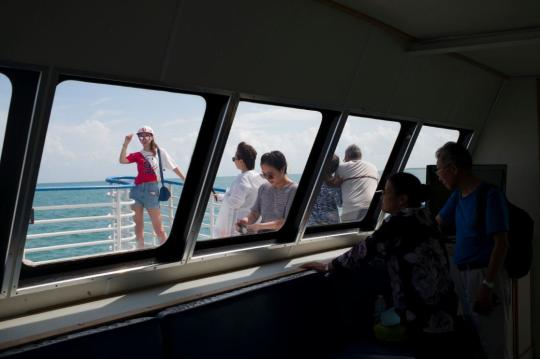 Travelers from China are seeking alternative destinations amid the trade war with the United States, as travel industry insiders keep a close eye on the decline in the number of those visitors.

Travel is the top U.S. industry export to China, generating a $29.8 billion trade surplus with the country in 2017 and accounting for 19 percent of all exports. In addition, Chinese tourists spend an average of $6,700 per trip, about 50 percent more than the average for international visitors.

Chinese travel to the U.S. fell by 5.7 percent last year to 2.9 million visitors, the first fall in 15 years, according to the National Travel and Tourism Office.

"The U.S. government's restrictive policies for travelers and students are not supported by many companies and most people in the U.S.," said Gideon Salzman-Gubbay, chief operating officer of ACE89, a company that helps businesses engage with Chinese audiences.

"Countries succeed by having open systems, not closed borders," he said. "The U.S. has long thrived through openness and diversity. China, of course, has conducted business and cultural exchanges with openness for thousands of years, as exemplified by the Silk Road.

"Travel, communication and exchanges can be forces for good in the world. People have sought travel and learning experiences since time immemorial. Countries that stay static, and people with closed minds, cannot succeed."

During the 2019 IPW, a travel industry trade show staged from June 1 to 5 in Anaheim, California, U.S. Travel Association president and CEO Roger Dow acknowledged a decline in the U.S.' share of global long-haul travel－even as the sector expanded.

"When we met last year, I told you that the U.S. was losing international travel market share. Unfortunately, that is still the case," he said.

According to the association, the U.S.' share of the global travel market dropped from 13.7 percent in 2015 to 11.7 percent last year.

Research company Tourism Economics reported that the U.S. overseas market grew by only 2 percent last year. "This tepid performance is somewhat more concerning as visits to the U.S. slowed in the second half of 2018, with notable weakness for Germany and key Asian markets－particularly China, South Korea and Japan," the company said.

The trend was also noted in a report released in November by ForwardKeys, a European travel research agency. It found that weekly bookings from China to the U.S. rose by 2 percent from the last week of February to March 23 last year, when the first tariffs imposed in the trade war took effect. Since then, the year-on-year figure to November fell by 7.2 percent, reflecting the escalation of trade tensions and the announcement of new tariffs by the two countries.

The negative impact on the yuan, which has fallen by 8.7 percent against the U.S. dollar since tariffs were introduced－meaning that Chinese tourists' money buys less－and warnings from Beijing about U.S. travel security risks, have likely further influenced the trend, the report said.