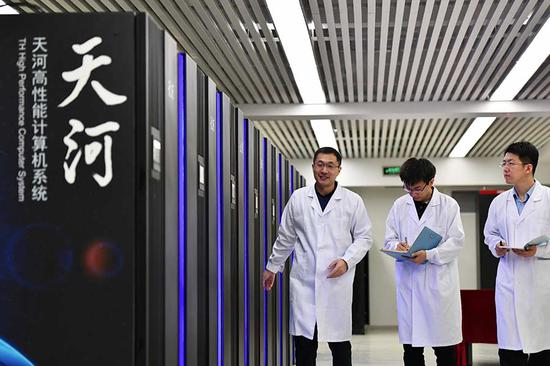 Scientists check the condition of the Tianhe-3 supercomputer at the National Supercomputer Center in Tianjin in April. (Photo/Xinhua)

Research and development work on the next generation of exascale supercomputers, the Tianhe-3, is expected to be completed by around 2021, according to the National Supercomputer Center in Tianjin.

Making the announcement at a ceremony to mark the country's 40-year development in supercomputing, officials said that the new machines will have a calculation speed that is 200 times faster than the present models and have storage capacity that is 100 times more than the Tianhe-1. The speed is expected to hit a billion billions, or 1 followed by 18 zeros.

Insiders indicated that 2021 could see tough competition among the exascale supercomputers around the world in their final stage of research.

The US' first exascale supercomputer will be delivered by 2021, while the European Union and Japan have announced their completion by around 2020.

The Tianhe-3 based in the Binhai New Area is expected to herald a new chapter for the intelligent manufacturing industry in the city and drive technology innovation among Beijing, Tianjin and Hebei provinces.

Liu said: "The past 10 years have seen an innovation convergence in homegrown computing technologies, high-efficiency semiconductors, high-speed interconnections and operational systems. The next decade will be a golden one for companies like Sugon and Insper, especially for their high speed servers and computing systems."

Currently, how big data, artificial intelligence and exascale supercomputers can promote traditional industries' transformation and regional development will be the key challenge for the sector, said experts.

Zhang Yunquan, director of the National Supercomputer Center in Jinan, East China's Shandong province, said that China's supercomputers are feeling the pinch from the gaps in applications and software development.

"In areas such as manufacturing industries and basic research sectors where supercomputers are used widely, foreign software companies have dominated the market ... and China needs to make huge investments on software procurement and upgrading.

"In addition, China has a shortage of software development research personnel for supercomputers," said Zhang, adding that China's supercomputer makers should transfer their development model to be more market and application driven.

In addition, focus needs to be paid to software development and education and stimulation of human resources.

To date, China has built six national supercomputing centers since 2009, mainly as new drivers of innovation.

Since the establishment of the center in Tianjin was approved by the Ministry of Science and Technology in May 2009, five other supercomputing centers were founded in Shenzhen, Jinan, Changsha, Guangzhou and Wuxi.