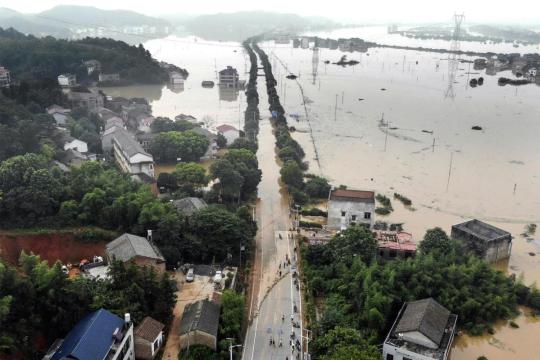 A main road leading to Hengdong county, Hunan province, was submerged by floodwaters on Thursday. The levee of a nearby river had two bursts of about 50 and 30 meters on Wednesday, leaving several villages soaked. （YANG HUAFENG/FOR CHINA DAILY）

The National Meteorological Center issued the yellow alert for heavy rain at 6 am Friday, saying that heavy rain is expected to hit large areas of southern China, including Jiangsu, Shanghai, Zhejiang, Guangxi, Hunan and Anhui on Friday and Saturday.

Heavy rains since June have swollen rivers in southern China, and the Ministry of Water Resources Thursday issued a yellow alert for floods in 10 provincial-level regions, including Jiangxi, Hunan and Guangxi.

Floods exceeding alarms occurred in rivers around Dongting Lake and Poyang Lake in the middle and lower reaches of the Yangtze River.

The water level in the main stream of the Yangtze River will exceed the alarm level Friday for the first time in this year's flood season, according to the ministry.

Heavy rains and floods have killed dozens of people, affecting millions of residents and causing billions of direct losses in southern China during the latest round of rainfall in July.

Twenty-two people have been killed and over seven million people affected by heavy rain that has brought floods in East China's Jiangxi province since June, local authorities said Thursday.

The floods have forced evacuation of over 594,000 people and affected about 469,300 hectares of crops, causing direct economic loss of 15.9 billion yuan ($2.3 billion), local authorities said at a press conference.

In Guangxi, local authorities said Wednesday rainfall had intensified since last Saturday, unleashing floods in nine cities in central and northern Guangxi, leaving one person missing while disrupting the lives of over 360,000 residents. The direct losses reached 743.96 million yuan.