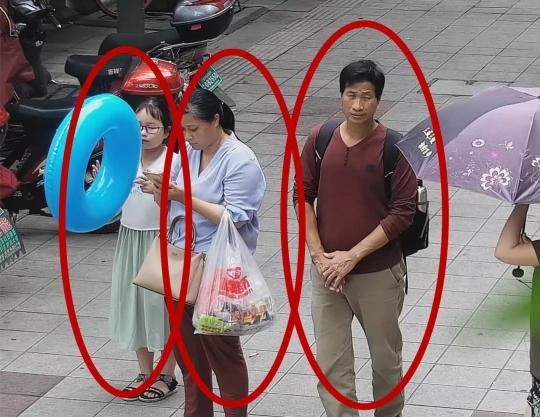 This surveillance image shows Zhang Zixin and the two tenants who took her away. (Photo/WeChat account: pinganchunan)

A 9-year-old girl taken from her home in a rural part of Hangzhou, Zhejiang province, on July 4 is still missing despite two days of searches organized by the authorities.

The girl was said to be removed from her home by a man and a woman who were later found dead in a lake in Ningbo, Zhejiang.

Authorities in Ningbo's Xiangshan county arranged for about 300 people to search the sea and mountains near Songlanshan Beach, where the girl, Zhang Zixin, was last seen with the two suspects in surveillance camera footage at around 7 pm on Sunday.

Also searched was a toll gate 2 kilometers away, where the two were spotted by another camera three hours later without the girl.

The search in the designated area ceased at 4:30 pm on Thursday, and the teams said that they will search further out into the water and surrounding areas on Friday.

Xiangshan police said the suspects-a man surnamed Liang and a woman surnamed Xie, both in their 40s and from Huazhou, Guangdong province-were seen by a surveillance camera getting into a taxi at 11 pm on Sunday.

Their bodies were found in Dongqian Lake in Ningbo the next morning. Police said a preliminary investigation determined that they likely committed suicide and their clothes were tied together.

An investigation team was set up after the girl's father, Zhang Jun, told police in Hangzhou's Chun'an county on Monday that she was missing.

"My daughter is a very good girl and can take good care of herself in daily life. She knows my mobile phone number and home address," he told City Express.

Zixin lived with her grandparents in a village in Chun'an. Her father works in Tianjin and her mother works in Dongguan, Guangdong.

They took Zixin away from home on July 4, telling the grandparents they wanted to take her to a friend's wedding in Shanghai and promised to return after two days.

Zhang Jun said he did not agree when his parents told him over the phone about the tenants' plan to take his daughter to Shanghai.

He managed to talk to Zixin on the phone on July 5 but could not reach the tenants by phone the next day.

He rushed back from Tianjin and arrived in Hangzhou on Sunday.

The father said he had been told by police that Liang and Xie had shown up in Fujian province after taking Zixin from her home and had not gone to Shanghai.

ThePaper.cn reported on Thursday that the girl's mother, surnamed Zeng, returned to Zhejiang on Monday to divorce her husband. They separated four years ago.

Zeng was unaware that her daughter was missing.