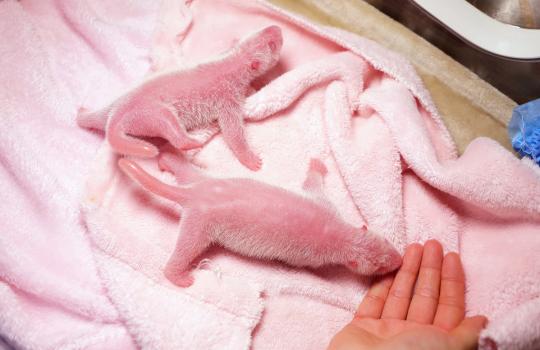 A pigeon pair is born at the Chengdu Research Base of Giant Panda Breeding, Sichuan Province, on Saturday. (Photo provided to China Daily)

The world's heaviest panda pigeon pair has been born in Chengdu, Sichuan Province.

According to the Chengdu Research Base of Giant Panda Breeding, Ah Bao, a 9-year-old panda, gave birth to a male cub and a female cub at 7:41 am and 9:28 am on Saturday.

Ah Bao, who had just given birth for the first time, tried for two minutes to hold one of the cubs and lick it like a dutiful mother, Zhang said.

Ah Bao was born in Atlanta Zoo in the United States in 2010, when the film Kung Fu Panda was a hit.

Her keeper mistook her for a male and named her Ah Bao, the male character in the film. When she was about to return to China in 2013, she was found to be a girl, Zhang said.

The average weight of a newborn panda cub is around 150 grams. It is rare for both of the twin cubs to each weigh more than 200 grams, he said.

Although the pigeon pair born on Saturday was only slightly heavier than Ying Ying and Ni Ni when they were born, the duo were five times as heavy as the famous "thumb girl" panda cub born on June 11.

Chengda, an 8-year-old female panda, gave birth to two female cubs in the base that day. One of the cubs weighed 171.9 grams and the other 42.8 grams.

Zhang said it was "less than one quarter of the weight of its elder sister and measured only two-thirds as long."

The smaller cub was about the weight of an average chicken egg.

Set up in 1987 with six sick and hungry pandas rescued from the wild, the Chengdu base is now home to 200 of the bears.