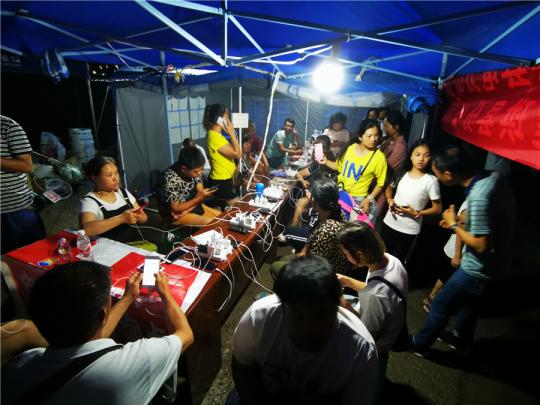 People displaced by the recent seismic activity in Yibin, Sichuan province, charge their phones in a temporary settlement area after a magnitude 5.4 aftershock on Saturday. (Photo by Deng Ye / For China Daily)

Twenty-one of the injured have been hospitalized for treatment, but none of them is in critical condition, Li Tinggen, secretary-general of the Yibin municipal government, said at a news conference on Sunday.

Li said the search and rescue operation after the earthquake has ended and the government will shift its focus to post-quake reconstruction to be completed before Chinese New Year, which falls on Jan 25.

Wang Hui, head of Yibin's earthquake prevention and disaster mitigation bureau, confirmed that Gongxian experienced an aftershock of the quake in Changning, another county in Yibin.

The aftershock struck at 10:29 pm on Saturday at a depth of 10 kilometers with stronger trembling than the Changning quake, said Zhang Jun, head of the publicity department of Gongxian committee of the Communist Party of China.

As Gongxian was also hard hit by the Changning quake, all its leading officials took part in relief operations in the subsequent days and met each evening to discuss the next day's work.

"During the evening meeting on Saturday, the aftershock occurred. I felt the table and chairs shaking violently. A lamp in the meeting room fell lower, but fortunately stayed hanging and did not hit anyone," Zhang said.

Bian Chaoling, 55, a resident of Sichuan's capital, Chengdu, which is 310 km from Gongxian, was sitting on a sofa in the lobby of the 25th floor of the Ritz-Carlton Hotel in Chengdu when the Gongxian aftershock hit.

"I felt the sofa shaking, and I felt dizzy," he said.

People in many parts of Sichuan－including Chengdu, Meishan, Leshan and Zigong－could feel the aftershock on Saturday because its depth was only 10 km, said Sun Shiyun, a researcher at China Earthquake Networks Center.

It is rare for a region to have several aftershocks above magnitude 5.0, Sun said, and he could not predict whether stronger aftershocks would follow.

Zhang Zhiwei, deputy director of Sichuan Earthquake Prediction Research Center, said the epicenter of the Changning quake was at the edge of the Sichuan Basin, which has many small-scale secondary faults.

The Changning quake's aftershocks are related to triggering activities of many faults near the earthquake zone.