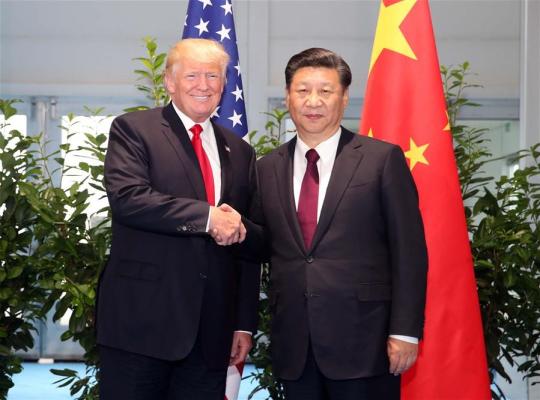 President Xi Jinping meets with his U.S. counterpart Donald Trump on the sidelines of a G20 summit, in Hamburg, Germany, on July 8, 2017. (Photo/Xinhua)

Sino-U.S. leaders' meeting on the sidelines of gathering in Japan expected to ease tensions

President Xi Jinping's upcoming trip to Japan for the G20 Summit will reinforce international consensus on upholding multilateralism and an open economy amid rising protectionism that looms large over the global economy, observers said.

They said Xi's upcoming meeting with United States President Donald Trump on the sidelines of the summit could also de-escalate bilateral trade tensions between the world's two largest economies.

Xi will be in Japan from Thursday to Saturday to attend the 14th G20 Summit in Osaka at the invitation of Japanese Prime Minister Shinzo Abe, Foreign Ministry spokesman Lu Kang said on Sunday.

China is expected to use the multilateral meeting to reiterate its commitment to international cooperation, oppose protectionism and preserve the stability of the existing international economic order, said Zhou Fangyin, a senior researcher of international relations at the Guangdong Institute for International Strategies.

Global leaders from economies that represent over 80 percent of the world's GDP will gather in Osaka later this week to discuss such issues as the global economy, trade and investment, innovation, the environment, energy and employment.

The summit comes amid growing concerns that trade friction between China and the U.S. threatens global economic growth.

"China strives to expand economic and trade partnerships via multilateral trading platforms or regional economic cooperation mechanisms, which, to some degree, help boost confidence in the international community," Zhou said.

The G20 Leaders' Summit, established in response to the 2008 global financial crisis, needs to send a clear message in opposing protectionism and upholding an open economy to allay growing uncertainties and risks in the global economy, he added.

Guillermo Santa Cruz, director of the Chinese Investment Monitor of the Argentina-China Chamber of Commerce, wrote in an article published in the Preview Policy Report for the G20 Osaka Summit that "we are at a point where we need to strengthen the message of openness, integration and fair competition that will take us to a shared prosperity".

Xi and Trump agreed in a phone conversation last week to meet in Japan. Their upcoming meeting has raised hopes that the two countries will narrow their differences. The news has turned global stock market sentiment upward, though concrete efforts are still needed to reach a deal, experts said.

Chen Hongbin, associate researcher at the Shanghai Institutes for International Studies, said the Xi-Trump meeting will undoubtedly be in the spotlight during the G20 Summit.

Chen said that long-lasting trade friction has led to downside risk for the Chinese economy, and a negative impact also looms over the U.S. economy.

The International Monetary Fund warned earlier this month that U.S.-China tariffs that have been implemented or proposed could cut global economic output by 0.5 percent, or $455 billion, in 2020.

The Xi-Trump meeting will help ease tensions between Beijing and Washington in trade disputes, Zhou said. "You can't expect the meeting to resolve the trade issue, but it will inject impetus into trade talks," he added.

Stephen Roach, a faculty member at Yale University and a former chairman of Morgan Stanley Asia, said in the Preview Policy Report for the G20 Osaka Summit that resolution is possible, but it won't be easy in the current climate.

"America's bipartisan political support of China bashing is especially problematic in threatening to turn a trade war into a protracted and destructive economic cold war," Roach said. "Now, more than ever, a fragile world is in desperate need of political will and wisdom."