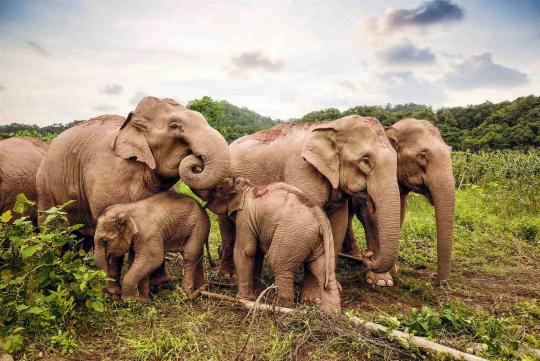 Asian elephants forage in Menghai county, Yunnan province, in 2018. Elephants can roam up to 40 kilometers a day. (PROVIDED TO CHINA DAILY)

Asian elephants, an endangered species, are expected to receive better protection through the creation of a new research center and expansion of one breeding and rescue center and creation of another in Yunnan province.

The Asian elephant research center will be located in the Xishuangbanna Dai autonomous prefecture — the main habitat of wild elephants in the province, local authorities announced on Tuesday. It will be supervised by the provincial forestry department.

The center will encourage cross-border studies and research, including the ecology where elephants live, their behavior, genetics and relationship with local society. Officials say that will provide guidance to help save the species from extinction and ease tension between elephants and residents.

Yunnan, with the only habitat of wild Asian elephants in China, has witnessed a significant increase in the elephant population from 170 in the 1970s to the current 300 thanks to protection efforts, according to the Yunnan Provincial Forestry and Grassland Department.

But the elephants' need for food and habitat also has expanded rapidly, leading to conflicts with residents.

Some 85 percent of the 153,000 confrontations between humans and wild animals in the prefecture between 1991 and 2010 involved wild Asian elephants, leading to the deaths of 33 people and 165 injuries, officials said.

"Wild elephants and humans should coexist in harmony, which requires the government to draft new protection plans with sustainable development for the long term," said Ren Zhizhong, director of the provincial forestry department.

An Asian elephant breeding and rescue center in Xishuangbanna is being expanded, Ren said, and another center will be established in Puer to help boost the species' population and encourage the return of captive-bred elephants to the wild.