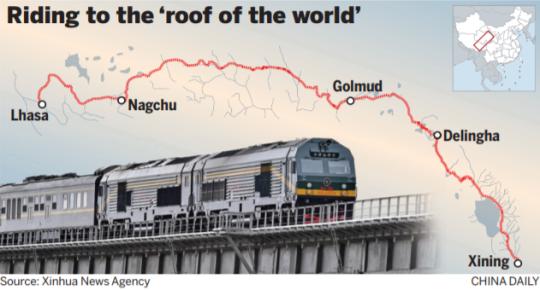 "Without the railroad, I would never have been able to start my business," Gyara Gyatso said. He explained that the idea of running a hotel or travel agency took root in 1998, when he left Tibet for the first time and joined the People's Liberation Army, where he came across countless people yearning to visit the region.

While serving in the southwestern province of Yunnan for two years, he noticed an invariable reaction when he introduced himself as being from Tibet: A dreamy, almost nostalgic look crept into people's eyes. "I want to go to Tibet," they told him wistfully.

He understood their strong desire to see Tibet's rare wildlife and distinctive natural and cultural heritage, and he could also see the business potential. However, at the time, Tibet's inaccessibility meant it wasn't easy for travelers to visit the region.

The poor transportation facilities forced Gyara Gyatso to set aside his dream and return to Shigatse in 2000 to work for a company that produced specialty items, such as yak meat and yak's milk yogurt. Six years later, the opening of the Qinghai-Tibet Railway brought him a step closer to his vision.

When he heard about the opening, he booked a round trip between Golmud in Qinghai and Lhasa to conduct "market research". Weaving through groups of tourists with various accents and even different nationalities on the train, he felt sure Tibet's improved accessibility and affordability would see tourism expand rapidly.

He quit his steady job and started selling cordyceps sinensis, a mushroom used in traditional Chinese medicine. He later became a second hand car dealer in a bid to raise enough funds for his business.

Finally, in 2015, using a bank loan and the money he had saved over 15 years, he invested more than 2 million yuan in his first hotel.

"My parents and friends tried to talk me out of taking the risk," he said. "But I could not afford to ignore the opportunities amid the tourism industry's skyrocketing development."

The week after opening, he welcomed his first batch of guests; two families from Guangdong province. Even though there weren't enough guests to fill all 50 rooms, their more-than monthlong stay boosted his confidence and he earned over 8,000 yuan.

That year's summer vacation period was a "cardiotonic" for Gyara Gyatso, as tourists poured into the hotel, booking almost all the rooms. He was so busy that he had to postpone plans to pick up his parents and have them stay at the hotel to celebrate his success. He made more than 100,000 yuan in the first half of the year.

"Many farmers abandoned agriculture to set up businesses catering for tourists, work as tour guides or drivers, run family hotels or restaurants, or make handicrafts for the rising number of visitors," he said.