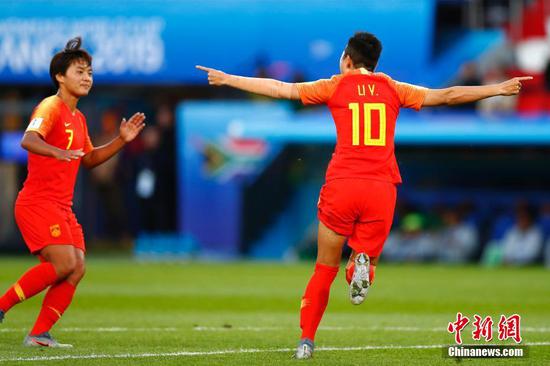 China finally have three points in their name after nipping 1-0 over South Africa, while Australia ruined Marta's record day by beating Brazil 3-2 at the Women's World Cup on Thursday.

Chinese forward Li Ying's first-half volley saved the 1999 runners-up from the brink of exit as a lacklustre fixture pit China and the World Cup debutants South Africa in Group B in Paris.

Receiving from playmaker Zhang Rui, who sliced the rivals' defending line on the right and curled in a perfect cross, Li came up to a cool finish, beating South African captain Janine van Wyk to the ball to prod past a stranded keeper Kaylin Swart in the 40th minute.

The 26-year-old Li, who's making her debut on World Cup stage, said after the match: "It doesn't matter if I score, the most important thing is winning as a team."

With the victory, China extended the aggregate score against South Africa to 29-0 and sent Group B leaders Germany to a secured spot of qualifying to the last 16, while remains hopeful to join the world No. 2 alongside with Spain.

As 24 teams are divided into six groups, the top two of each group and the four best third-placers qualify for the round of 16.

China head coach Jia Xiuquan, however, was rather unsatisfied, with a desire for more goals.

"I think my players should still have been better at seizing the chances at the critical moment and should have been calmer. For the next game, the team needs to improve control of the ball," said the former head coach of China's men's U-19 national team.

South Africa looked to pose a few threats to the former Asian powerhouses through counter-attacks, but the lack of accurate final touch cost them all the promising opportunities.

Banyana Banyana's best chance came through Thembi Kgatlana as Africa's Player of the Year, who scored in the 3-1 defeat to Spain, burst into the box and fired into the side net.

Elsewhere on Thursday, a battle of top 10 ranked teams in the world pit Brazil and Australia in Montpellier, where Brazilian star Marta equalled World Cup scoring record despite a shock defeat for her team.

The 33-year-old converted a penalty kick in 27th minute to open the scoring and tied with Germany's Miroslav Klose on 16 World Cup goals before Cristiane doubled the lead for Brazil.

A 66-minute own goal from Monica, however, helped Australia to take the comeback win after Caitlin Foord pulled one score back for Australia before the interval and Chloe Logarzo claimed a distance shot in 58th minute.

Brazil now sit temporarily on top of Group C with three points with better goal differences ahead of Italy, who have a match in hand and will take on Jamaica on Friday.