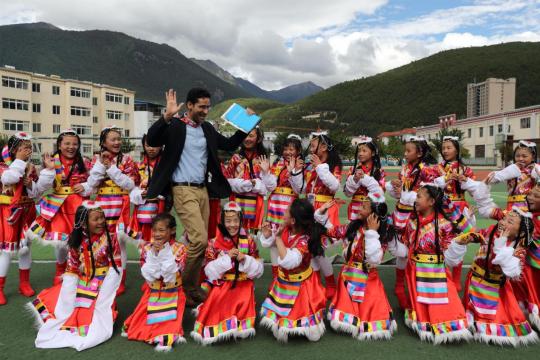 The fast and dynamic development in the Tibet autonomous region impressed a group of foreign visitors in the region this week.

Ahead of the 2019 Forum on the Development of Tibet, which opens on Friday in Lhasa, nearly 30 foreign journalists from countries including the United Kingdom, Italy and Argentina, and foreign experts working in China were invited by the State Council Information Office and the regional government to visit the cities of Nyingchi and Lhasa, and hold talks with people from various walks of life.

The four-day tour helped the reporters learn about Tibet's development in fields including environmental protection, livelihood and culture.

Italian journalist Rita Fatiguso, of Il Sole 24 Ore, has been to Tibet three times. A lot has happened in the nine years since she first came, she said.

People have become more affluent, not just in the abundance of food, but in their social lives as well, she said.

Tibet is located in a challenging geographical environment, but the Chinese government has invested heavily to make changes, and great progress has been made as a result of huge input into infrastructure, she said.

In Nyingchi, a city in the southeastern part of Tibet, the delegation visited the villages of Xiga Monba and Trashigang.

"I used to think that Tibetan villages were all rural villages, but the villages we visited have more houses and facilities, and it is totally different from what I had imagined," said Zied Moumni, a French professor at Northwestern Polytechnical University in Xi'an, Shaanxi province.

"When I see the modern facilities and the local traditions, the word that comes to me is harmony," Moumni said.

With the advantages of ecology, Nyingchi has also developed its tourism industry with the Lunang International Tourism Town and the Lunang Maker Space, a platform also engaged in selling local specialties and creative cultural products.

For tourists coming from Europe, what they want to see is beautiful nature, said Liz McLeod, creative director of Meridian Line Films in the UK.

"I think that I understand that the local government is trying to make a very comprehensive plan to make sure the tourism is developed in the way that is in harmony with nature and doesn't damage the natural environment," McLeod said.

In Lhasa, the delegation visited the Hospital of Traditional Tibetan Medicine, the Potala Palace, the Jokhang Temple and Bakor Street, as well as other places.

"I believe that it is important that the traditional culture be respected, promoted and preserved," said Gustavo Emilio Ng, director of Dangdai Magazine in Argentina.

"All of that is well-protected by local people in Tibet," he said.